First, for the humor:

By the way, I just wish to note that the Leftist MSM and the Leftist politicians like to say that “Right Wing” organizations (most are really Left-Wing orgs, but that is neither here nor there) want to secede and are “anti-government.” However — like with all the other items I could list, it is actually Lefties that attempt it. I think it is hilarious. Here is ANDY NGO keeping us in the loop, with a hat-tip to GATEWAY PUNDIT:

RIGHT SCOOP has the latest video from PROJECT VERITAS and the main point of this installment is that they want to secede fully from America. Here is a bit from RS and then the video:

“We believe in complete abolition of the system…” – O’Keefe undercover video shows Antifa militia group in North Carolina ….. James O’Keefe is out with a new video that shows how one of his agents infiltrated an Antifa-ish militant group in Shelby, North Carolina ….The group is called Redneck revolt and they were among the groups at Charlotteville in 2017. The undercover journalist explains that they are the militia wing of Antifa, adding “they are Antifa in that they share the Antifa ideology.”

While we’re on the topic of Antifa, here’s a clip from Lara Logan that you might find interesting on how organized they are and how they stay one step ahead of police:

This is the only time I’ve seen someone explain on MSM how organized and deceptive #antifa truly are. Thank you, @laralogan. pic.twitter.com/ApGCJ7cVcb

Mark Twain said that history doesn’t repeat itself, but that it rhymes. Which leads us back to the earliest parts of our founding as a nation… we had to realize that socialism didn’t work… at all. These radical fascists in their “Capital Hill Free Zone” are learning the same lesson. Here is my Facebook post, with media added in here for easier viewing.

Hat-tips to WEASEL ZIPPERS and TWITCHY and me (RPT):

Jamestown too was first a socialist society where each produced according to his ability and received according to his need which, of course, affected supply. One cannot divide what does not exist. Our textbooks tell us that only one of twelve survived the first two years for precisely the same reason, starvation.

I mean, you can’t make this stuff up! GATEWAY PUNDIT:

Antifa domestic terrorists set up an “autonomous zone” in six square blocks in Seattle this week.

On Tuesday “Free Capitol Hill” the antifa “Autonomous Zone” released its list of demands from the Seattle and Washington State governments.

The list includes reparations, ending the police and free stuff — pretty much what you would expect from a bunch of illiterate leftie kids.

The “police free zone” is a perfect utopia of free love, free food, free water and no police!

Until the anarchists ran out of food.

One of the Antifa organizers in Seattle, an 18-year-old lesbian anarchist who wants to “abolish whiteness, capitalism, and civilization,” begged for vegan meats and soy after the homeless people they invited in took all the food.

“The homeless people we invited took away all the food at the Capitol Hill Autonomous Zone.” 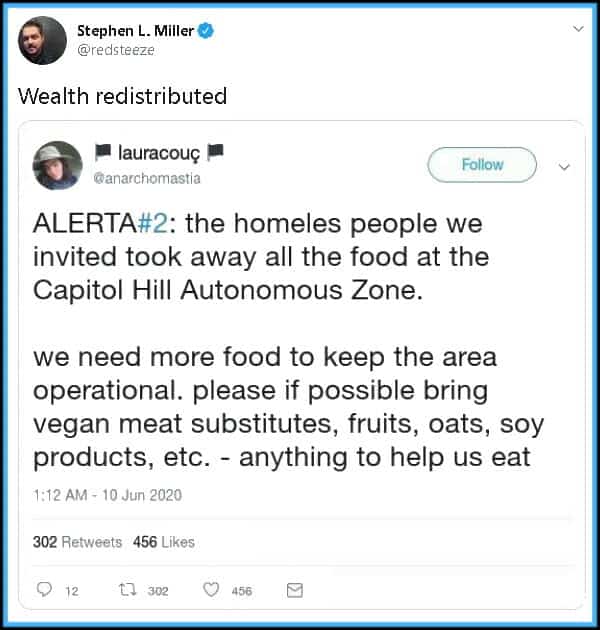 ECONOMICS 101 is easier to learn by intuition rather than the hard way. The longer this is allowed however, the crazier it will get: Andy again:

The antifa #CapitalHillAutonomousZone in Seattle has a subreddit set up. They are posting about making homemade chemical weapons, maintaining supply lines, & how to use those armed with guns to push police back. #antifa @FBISeattle pic.twitter.com/gDub2G49KU