“Shrinking Glaciers – In 2013, an iceberg larger than the city of Chicago broke off the Pine Island Glacier, the most important glacier of the West Antarctic Ice Sheet. And at Montana’s Glacier National Park glaciers have gone from 150 to just 35 over the past century.”

The EDF’s assertion about Glacier National Park is also misleading. Alpine glaciers at Glacier National Park and elsewhere have been receding for over 300 years, since the Earth’s temperature bottomed out during the depths of the Little Ice Age. The warming of the past 300 years and the resulting recession of alpine glaciers predated humans building coal-fired power plants and driving SUVs. Moreover, opening up more of the Earth’s surface to vegetation and plant and animal life would normally be considered a beneficial change, if global warming alarmists had not so thoroughly politicized the global warming discussion. 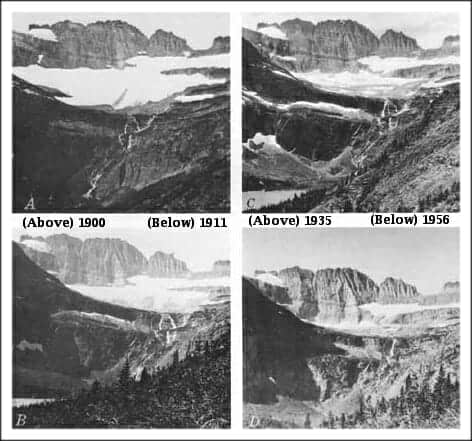 Hockey Schtick piles on with this historical look back on Glacier National Park:

A new paper published in Quaternary Science Reviews finds that alpine glaciers in Glacier National Park, Montana retreated up to 6 times faster during the 1930’s and 1940’s than over the past 40 years.  The “Multi-proxy study of sediment cores retrieved from lakes below modern glaciers supports the first detailed Neoglacial chronology for Glacier National Park (GNP)” and shows “maximum reconstructed retreat rates [in] 1930” of about 125 meters per year, compared to near zero in ~1975 and about 20 meters/year at the end of the record in ~2005.  The authors report, “Results indicate that alpine glaciers in Glacier National Park advanced and retreated numerous times during the Holocene after the onset of Neoglaciation 6,500 years before the present” and “Retreat from the Little Ice Age maximum was the most dramatic episode of ice retreat in at least the last 1000 years.”

Some more in-depth studies on Glacier National Park detailing the rapid recession before man started to insert in earnest CO2 into the atmosphere can be found here:

Another blow to the glacier myth comes from WATTS UP WITH THAT and notes that the “receding Swiss glaciers inconveniently reveal 4000 year old forests – and make it clear that glacier retreat is nothing new,” …continuing:

Dr. Christian Schlüchter’s discovery of 4,000-year-old chunks of wood at the leading edge of a Swiss glacier was clearly not cheered by many members of the global warming doom-and-gloom science orthodoxy.

This finding indicated that the Alps were pretty nearly glacier-free at that time, disproving accepted theories that they only began retreating after the end of the little ice age in the mid-19th century. As he concluded, the region had once been much warmer than today, with “a wild landscape and wide flowing river.”….

…Other evidence exists that there is really nothing new about dramatic glacier advances and retreats. In fact the Alps were nearly glacier-free again about 2,000 years ago. Schlüchter points out that “the forest line was much higher than it is today; there were hardly any glaciers. Nowhere in the detailed travel accounts from Roman times are glaciers mentioned.”

Schlüchter criticizes his critics for focusing on a time period which is “indeed too short.” His studies and analyses of a Rhone glacier area reveal that “the rock surface had [previously] been ice-free 5,800 of the last 10,000 years.”

Such changes can occur very rapidly. His research team was stunned to find trunks of huge trees near the edge of Mont Miné Glacier which had all died in just a single year. They determined that time to be 8,200 years ago based upon oxygen isotopes in the Greenland ice which showed marked cooling.

Casting serious doubt upon alarmist U.N.-IPCC projections that the Alps will be nearly glacier-free by 2100, Schlüchter poses several challenging questions: “Why did the glaciers retreat in the middle of the 19th century, although the large CO2 increase in the atmosphere came later? Why did the Earth ‘tip’ in such a short time into a warming phase? Why did glaciers again advance in the 1880s, 1920s, and 1980s? . . . Sooner or later climate science will have to answer the question why the retreat of the glacier at the end of the Little Ice Age around 1850 was so rapid.”

Although we witness ongoing IPCC attempts to blame such developments upon evil fossil-fueled CO2 emissions, that notion fails to answer these questions. Instead, Schlüchter believes that the sun is the principal long-term driver of climate change, with tectonics and volcanoes acting as significant contributors….

Regarding IPCC integrity with strong suspicion, Schlüchter recounts a meeting in England that he was “accidentally” invited to which was led by “someone of the East Anglia Climate Center who had come under fire in the wake of the Climategate e-mails.”

As he describes it: “The leader of the meeting spoke like some kind of Father. He was seated at a table in front of those gathered and he took messages. He commented on them either benevolently or dismissively.”