Here is the news almost everyone knew was coming, via RIGHT SCOOP and THE WASHINGTON TIMES: “Pelosi has reportedly informed her caucus that there will be no official impeachment vote in the House” 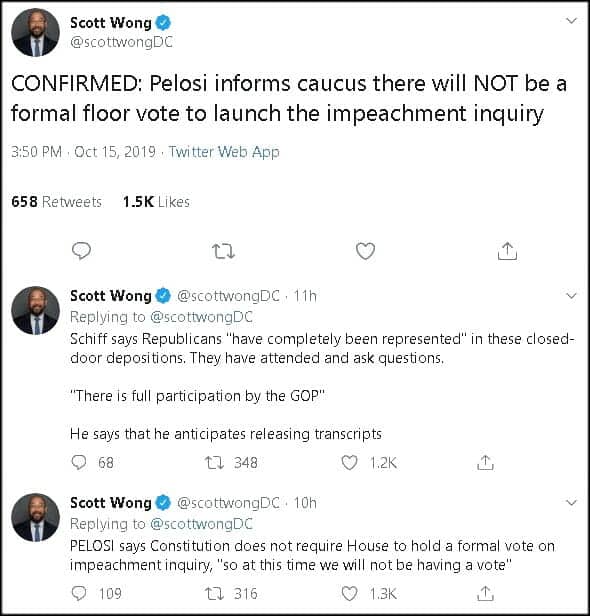 Now, my feeling on this final decision (of course, in politics nothing is ever “final”) is that after Marie Yovanovitch testified — presumably under oath — and apparently denied using State Dept resources to spy on American citizens, THI may have been a bridge too far for Nancy. So far everything has backfired on the Dems… this being the latest. And as more is known about the illegality of her and her staffs actions, the more Democrats stand to be hurt in 2020.

HOT AIR has a great post involving ALL THE ISSUES of this story… some of it is not too helpful to pro-Trumpers like myself… but for a good balance of this, read their whole piece… which ens thus:

So where does this ride come to a stop? How much of this is true — all of it, none of it, or only some of it? Trump loyalists will surely consider all of this as more evidence of a Deep State plot that now involves both the State and Justice Departments. Trump haters will see this as another case of foreign influence on the administration and a plot to smear Trump’s opponents, both electoral and otherwise. The rest of America might just be hoping that the [expletive deleted] ride would come to an end, period.

At this point, the mess is too complicated to suss out which conclusion reflects the truth. What does appear to true is that we’re not going to know for sure what’s true for a long, long time — and it might turn out, ironically, that the DoJ could end up as the most credible player in Ukraine-Gate.

Here are two videos discussing the issue introduced above: