This first story deals with a story run by CNN via RED STATE… hold for the hilarity of DDS (DeSantis Derangement Syndrome):

I wrote earlier about a story that spread far and wide, helped by a CNN report, that four teachers died from COVID within 24 hours in Broward County.

CNN then tried to hook it up to Florida Gov. Ron DeSantis and his ban on mandating masks, leaving it up to the parents to decide for their own children.

BREAKING: WFOR is reporting that 4 teachers from Broward county have died of covid in a single day.

Three were unvaccinated. We don’t know the status of the 4th. pic.twitter.com/uT4XW7irc5

But as I noted, school hasn’t even started in Broward County, and doesn’t start until August 18. So any teachers who got sick did so while on vacation, on summer break, and it had nothing at all to do with mask mandates, no mask mandates, or the schools.

The story originally claimed three teachers and a teacher’s assistant had died within 24 hours of COVID.

Now the media is walking back that statement. 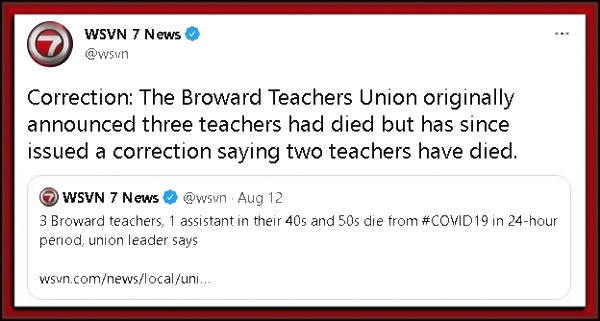 And in this story from REASON, they note NPR getting in on a correction of the CDC (hat-tip RIGHT SCOOP):

Another CDC data flub distorts delta variant contagiousness. The Centers for Disease Control and Prevention (CDC) claimed the delta variant of COVID-19 is “as transmissible as” chickenpox. It’s not true.

Chickenpox, caused by the varicella-zoster virus, is one of the most contagious diseases we know of. “If one person has it, up to 90% of the people close to that person who are not immune will also become infected,” states the CDC website.

One person infected with chickenpox will infect an average of 10 people when everyone in a population is vulnerable to catching it. (This transmissibility number—referred to as R0—goes down when people have immunity to the disease.)

“The initial COVID-19 strain had an R0 between two and three,” computational biologist Karthik Gangavarapu told NPR. The delta variant has an R0 between six and seven. For chickenpox, the R0 is nine or 10.

How did the CDC conclude that these were equivalent?

For one, the leaked document underestimated the R0 for chickenpox and overestimated the R0 for the delta variant. “The R0 values for delta were preliminary and calculated from data taken from a rather small sample size,” a federal official told NPR. The value for the chickenpox (and other R0s in the slideshow) came from a graphic from The New York Times, which wasn’t completely accurate.

Apparently, the federal agency charged with disseminating COVID-19 data and setting public health policy is taking its cues from a newspaper infographic. Oh my…..