“[T]he paradox is that God must destroy in us, all illusions of

righteousness before he can make us righteous…” 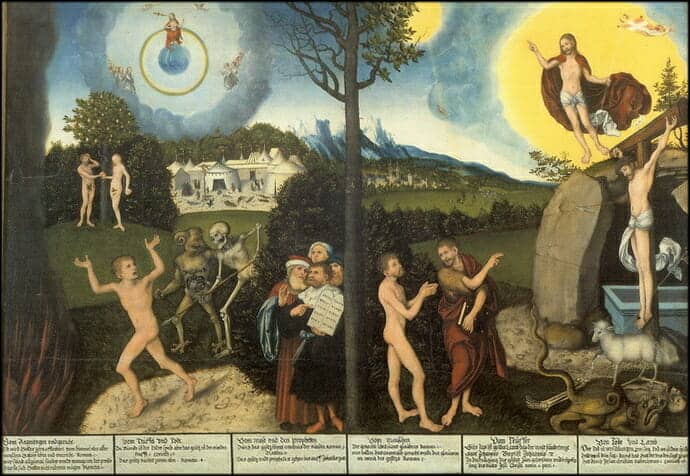 Luther LOVED Paul’s letter to the Romans. In this letter we find a battle of this “two-kingdom” idea (7:14-25[a]), which surely made him meditate on these things listed below.

A WILDERNESS OF CASUISTRY

In 1957, the great Reformation historian Johannes Heckel called Luther’s two-kingdoms theory a veritable Irrgarten, literally “garden of errors,” where the wheats and tares of interpretation had grown indiscriminately together. Some half a century of scholarship later, Heckel’s little garden of errors has become a whole wilderness of confusion, with many thorny thickets of casuistry to ensnare the unsuspecting. It is tempting to find another way into Lutheran contributions to legal theory. But Luther’s two-kingdoms theory was the framework on which both he and many of his followers built their enduring views of law and authority, justice and equity, society and politics. We must wander in this wilderness at least long enough to get our legal bearings.

Luther was a master of the dialectic — of holding two doctrinal opposites in tension and of exploring ingeniously the intellectual power of this tension. Many of his favorite dialectics were set out in the Bible and well rehearsed in the Christian tradition: spirit and flesh, soul and body, faith and works, heaven and hell, grace and nature, the kingdom of God versus the kingdom of Satan, the things that are God’s and the things that are Caesar’s, and more. Some of the dialectics were more uniquely Lutheran in accent: Law and Gospel, sinner and saint, servant and lord, inner man and outer man, passive justice and active justice, alien righteousness and proper righteousness, civil uses and theological uses of the law, among others.

When Luther, and especially his followers, used the two-kingdoms terminology, they often had one or two of these distinctions primarily in mind, sometimes without clearly specifying which. Rarely did all of these distinctions come in for a fully differentiated and systematic discussion and application, especially when the jurists later invoked the two-kingdoms theory as part of their jurisprudential reflections. The matter was complicated even further because both Anabaptists and Calvinists of the day eventually adopted and adapted the language of the two kingdoms as well — each with their own confessional accents and legal applications that were sometimes in sharp tension with Luther’s and other Evangelical views. It is thus worth spelling out Luther’s understanding of the two kingdoms in some detail, and then drawing out its implications for law, society, and politics.

More about the painting. Be aware that the text below may be imperfect as it was “Google Translated” ~ via WIKI

According to the letters of the Apostle Paul, man’s way out of condemnation, sin and law is presented to eternal life, faith and grace. Since for Martin Luther sin is inextricably linked to the human being, the believer of the Mosaic law needs to be aware of his sinfulness. He must realize that he will fail and despair of the commandments of the punishing Old Testament God. This despair is the prerequisite for salvation through Christ and the Gospel. According to the differentiation made by Luther, the tree in the center of the image separates the contrasted events from the Old and New Testaments. In the left half of the law, the tree of life is dried, on the right side of the gospel it bears greening branches. On the left, death and the devil chase the sinful man into hellish fire while looking to the right to Moses, who points to the tablets of the Ten Commandments in a group of prophets of the Old Testament. Representations of the sin and the Last Judgment in the wide landscape show the origin and punishment of human misconduct. The scene of the bronze serpent from the Old Testament, which is important to Luther, typologically points to the crucifixion and shows the salvation of the Israelites before the poison by following the direction of God.

Right on the right of the tree, John the Baptist can be seen along with the naked man on the left. John, as the last prophet before Christ, stands for Luther between the law and the gospel, which is why he has the role of mediator. He directs the attention of the naked, who stands completely calmly and with folded hands, to the Crucified at the right edge of the picture. From the side-wound of Christ is a stream of blood, which extends over nearly the whole width of the right half, and goes down on the breast of the naked. The dove of the Holy Spirit appears in the stream of blood. It is shown here that only Christ, who died vicariously for man and whose good news is transmitted by the Holy Spirit, can abolish the sentence by the law. Only by his faith, sola fide, does the man of divine forgiveness participate in the form of the delivering blood-stream. By the risen Christ, who rises above the grave-cave behind the cross, the dead and the devil who pursued the sinner on the left side are banned: both lie conquered before the cross, under the Lamb of God, like the Risen One The victory flag. The sinner of the law is, however, a righteous one, with which the Gotha image illustrates the aspect of simul iustus et peccator. At the gates of Bethlehem, in the background of the right, the Annunciation appears to the shepherds. Like the raising of the brazen serpent, which the eye of the beholder finds right on the other side of the tree, this scene shows the recognition of God’s Word by man. For the viewer, it is made clear that the law and the gospel proclaim the same joyous message which always leads to Christ. Quotations from the Old and New Testaments in the lower part of the table underline the statement and also provide the biblical legitimation of the representation.