Via Reformed Apologetics and CARM:

The following quote has the passages that are rejected as additions (italicized) by a Christian scribe in a later Latin transcription of Josephus:

And here is a 10th Century Arabic transcription from an earlier Greek copy:

For a chronological look at the text and it’s evolving historical significance, see: The Mystery of the Testimonium Flavianum

Again, here is the fixed version most historians accept…

…from this and Josephus’ other passage…

With the passage from Josephus fixed, and including his other history concerning that time/area — what do we know?

1. He existed as a man. The historian Josephus grew up in a priestly family in first-century Palestine and wrote only decades after Jesus’ death. Jesus’ known associates, such as Jesus’ brother James, were his contemporaries. The historical and cultural context was second nature to Josephus. “If any Jewish writer were ever in a position to know about the non-existence of Jesus, it would have been Josephus. His implicit affirmation of the existence of Jesus has been, and still is, the most significant obstacle for those who argue that the extra-Biblical evidence is not probative on this point,” Robert Van Voorst observes.32 And Tacitus was careful enough not to report real executions of nonexistent people.

2. His personal name was Jesus, as Josephus informs us.

3. He was called Christos in Greek, which is a translation of the Hebrew wordMessiah, both of which mean “anointed” or “(the) anointed one,” as Josephus states and Tacitus implies, unaware, by reporting, as Romans thought, that his name was Christus.

4. He had a brother named James (Jacob), as Josephus reports.

5. He won over both Jews and “Greeks” (i.e., Gentiles of Hellenistic culture), according to Josephus, although it is anachronistic to say that they were “many” at the end of his life. Large growth
in the number of Jesus’ actual followers came only after his death.

6. Jewish leaders of the day expressed unfavorable opinions about him, at least according to some versions of the Testimonium Flavianum.

7. Pilate rendered the decision that he should be executed, as both Tacitus and Josephus state.

8. His execution was specifically by crucifixion, according to Josephus.

9. He was executed during Pontius Pilate’s governorship over Judea (26–36 C.E.), as Josephus implies and Tacitus states, adding that it was during Tiberius’s reign.

(Via Tektonics AND Biblical Archaeology) 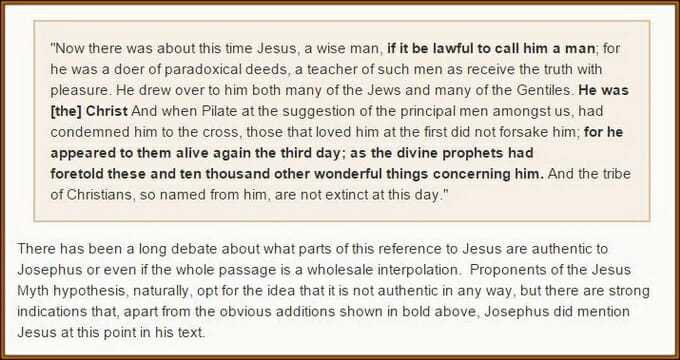