Senior Hamas leader Ismail Haniyeh (2nd R) and Egypt’s Prime Minister Hisham Kandil (2nd L) touch the body of a Palestinian boy, who was killed in an Israeli air strike, during a visit to a hospital in Gaza today. (Reuters)

Egypt’s Prime Minister wept as he kissed the forehead of a boy killed in an Israeli airstrike on Gaza.

But it was all a lie.

Hamas not only uses their children as human shields (firing rockets from kindergartens), but is, also, using their children’s dead bodies as propaganda…and lying. They claimed that the child in this picture, being held by Egyptian PM Kandil, was killed by an Israeli airstrike in Gaza. That’s a lie. He was killed by a Hamas rocket.

CNN takes it as a given that young Mahmoud Sadallah (Sadhala) was killed by an Israeli airstrike. Only one problem: he was killed by a Hamas rocket that fell short in Gaza. There is a lot of evidence for this. Read the New York Times’ account of his death:

The Abu Wardah family woke up on Friday morning to word that a hudna — Arabic for cease-fire — had been declared during the three-hour visit of the Egyptian prime minister to this embattled territory. So, after two days of huddling indoors to avoid intensifying Israeli air assaults, Abed Abu Wardah, the patriarch, went to the market to buy fruits and vegetables. His 22-year-old son, Aiman, took an empty blue canister to be refilled with cooking gas. The younger children of their neighborhood, Annazla, in this town north of Gaza City went out to the dirt alley to kick a soccer ball.

But around 9:45 a.m., family members and neighbors said, an explosion struck a doorway near the Abu Wardah home, killing Aiman Abu Wardah as he returned from his errand, as well as Mahmoud Sadallah, 4, who lived next door and had refused his older cousin’s pleas to stay indoors.

It is unclear who was responsible for the strike on Annazla: the damage was nowhere near severe enough to have come from an Israeli F-16, raising the possibility that an errant missile fired by Palestinian militants was responsible for the deaths. What seems clear is that expectations for a pause in the fighting, for at least one family, were tragically misplaced.

The IDF did not launch any airstrikes in Gaza while Egyptian PM Kandil was in Gaza. AP adds:

Mahmoud Sadallah, the 4-year-old Gaza boy whose death moved Egypt’s prime minister to tears, was from the town of Jebaliya, close to Gaza City.

The boy died Friday in hotly disputed circumstances. The boy’s aunt, Hanan Sadallah, and his grief-stricken father Iyad — weak from crying and leaning on others to walk — said Mahmoud was killed in an Israeli airstrike. Hamas security officials also made that claim.

Israel vehemently denied involvement, saying it had not carried out any attacks in the area at the time.

Mahmoud’s family said the boy was in an alley close to his home when he was killed, along with a man of about 20, but no one appeared to have witnessed the strike. The area showed signs that a projectile might have exploded there, with shrapnel marks in the walls of surrounding homes and a shattered kitchen window. But neighbors said local security officials quickly took what remained of the projectile, making it impossible to verify who fired it.

Of course, this isn’t the first time Hamas has pulled this trick. It won’t be the last. Maybe next time CNN will practice unbiased journalism and report the truth. Don’t hold your breath.

Hamas and the PLO are/were great at this lie that the legacy media swallows, remember this one:

Here is another recent example: 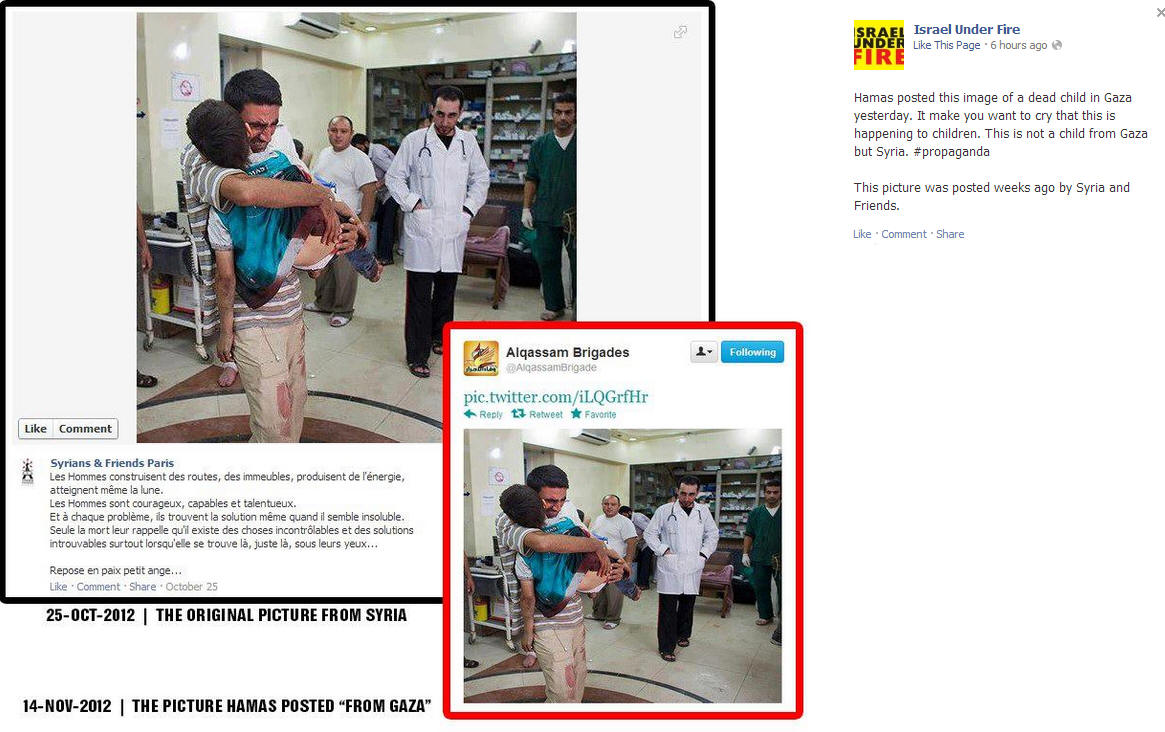 The picture [above] was tweeted by Hamas’ al-Qassam brigades Twitter account. It was designed to arouse sympathy for the father and the dead child he is holding.

As the picture on the left shows, the child was actually killed in Syria on October 25.

When it comes to Hamas, you have to believe me and not your lyin’ eyes (Hat Tip: Mrs. Carl).