Gun control advocates just need to look at Virginia. Between 2006-2011 gun sales went up by 73% and at the same time gun-related violent crimes fell 24%. Virginia Commonwealth University professor Thomas R. Baker, who specializes in research methods and criminology, said this proves that more guns do not in fact cause more violence.

“While there is a wealth of academic literature attempting to demonstrate the relationship between guns and crime, a very simple and intuitive demonstration of the numbers seems to point away from the premise that more guns leads to more crime, at least in Virginia,” said Baker.

Baker examined six years of data from the Virginia Firearms Transaction Center that broke down the number of gun transactions for every federally licensed firearm dealer in Virginia. Background checks went up from 243,251 in 2006 to 420,829 in 2011. In 2006 there were 23,431 violent crimes in Virginia and dropped to 18,196 in 2011.

Guns are a major part of Switzerland’s culture. Instead of a standing army they have a militia. Men between the ages of 20 and 30 are put into the militia and undergo military and weapons training, which means Switzerland has one of the highest gun ownership rates in the world. Yet, Switzerland has a low crime rate. In 2010 there were only 40 gun homicides.

Which supports the idea I intimated on my FaceBook the day of the attack:

I am even madder at Mayor Bloomberg (NY) and Mayor Menino (Boston) are using this opportunity to politicize a horror. I was listening to Larry Elder talk to a security expert, he made the point that our banks, federal buildings, many corporations, and the like have armed security. But our schools are soft targets. He said “you don’t think a bunch of terrorists are putting two-and-two together. Twin Tower type attacks… hard. Walking into a school… easy.”

If only 5% or 10% of the staff were trained and were able to carry concealed firearms… this would not have been so tragic. But crazy lefties are wanting to restrict what can only help in this type of situation. Crazy.

I watched 60-Minutes and the nurse that lived through the ordeal hid in the closet for 4-hours… and she said she felt helpless. No duh! Even having a 22 in her purse (or other faculty) and shooting out his kneecaps would have stopped countless deaths. And she wouldn’t have felt helpless. 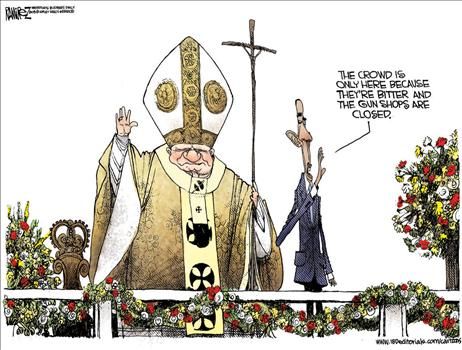 Gateway Pundit shares this story of the Police Chief saying “its time to arm staff:”

“I see it no differently,” he said. “Pilots have been armed now for many many years, we’ve not had another hijacking and the issue is, for the bad guy, he doesn’t know which airplane he’s getting on, if the pilot is armed or not.”

Fitch said the killing will not be stopped by legislation or laws. “If there’s somebody that’s really hellbent on doing something like this, they’re not going to care what the law is.”

An EXAMPLE of this logic working recently:

PORTLAND — Nick Meli is emotionally drained.  The 22-year-old was at Clackamas Town Center with a friend and her baby when a masked man opened fire.

“I heard three shots and turned and looked at Casey and said, ‘are you serious?,'” he said.

The friend and baby hit the floor.  Meli, who has a concealed carry permit, positioned himself behind a pillar.

“He was working on his rifle,” said Meli.  “He kept pulling the charging handle and hitting the side.”

The break in gunfire allowed Meli to pull out his own gun, but he never took his eyes off the shooter.

“As I was going down to pull, I saw someone in the back of the Charlotte move, and I knew if I fired and missed, I could hit them,” he said.

Meli took cover inside a nearby store.  He never pulled the trigger.  He stands by that decision.

“I’m not beating myself up cause I didn’t shoot him,” said Meli.  “I know after he saw me, I think the last shot he fired was the one he used on himself.”

This shooter saw an armed citizen, and took his life. Similarly, when Adam Lanza heard the first responders coming, he turned the weapon on himself.

Another recent example for the record books here at RPT, via Free Republic:

Two people are hospitalized after a gunman chased terrified restaurant patrons into the lobby of the Santikos Mayan 14 movie theater during a showing of “The Hobbit” last night, 1200 WOAI news reprots.

Police detectives and sheriff’s investigators say the incident started in the China Garden Restaurant on Southwest Military Drive about 9 PM Sunday, when an employee of the restaurant walked in looking for a woman.

When the woman, who officials say is also a restaurant employee, wasn’t there, the man pulled a gun and attempted to open fire in the restaurant but his weapon jammed.

“It started at the restaurant and then went into the parking lot and then into the movie theater,” Deputy Lou Antu told 1200 WOAI news.

Investigators say some of the terrified restaurant patrons poured into the movie theater, and the gunman followed.

He opened fire, shooting one man in the chest, before Antu says an off duty sheriff’s deputy who was working security at the theater shot him once.