Here is another more recent example. “Google has apologized to Republican North Carolina state Sen. Trudy Wade for an old photo of her with the superimposed word ‘bigot’ in red capital letters that appeared on the search engine’s results related to the senator’s name” (THE NEWS and OBSERVER).

Google is under fire for listing “Nazism” as the ideology of the California Republican Party; Rep. Kevin McCarthy reacts on ‘The Ingraham Angle.’ 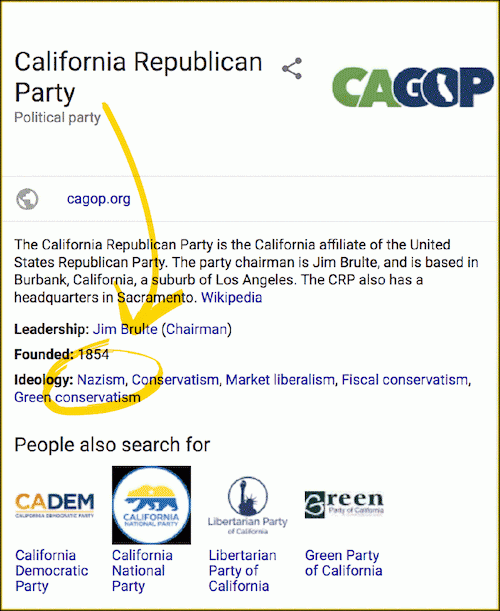 ….This is similar to the occasion when Google instituted discriminatory “fact checks” that showed up when people searched on the names of conservative media outlets like the Daily Caller. I wrote about that here.

“Nazism” presumably was the childish act of a junior Google employee. Maybe he is about to leave Google, or maybe he thinks his superiors will applaud what he did. It will be interesting to see how Google follows up. The “Nazism” reference was removed after a complaint.

As on so many prior occasions, one wonders whether the Department of Justice’s Antitrust Division is preparing some action against the left-wing internet oligarchs. If so, they had better get cracking. If our next president is a Democrat, such childish games as we saw today are likely to be institutionalized and rewarded.