The AP has this insightful article (remember… all my graphics are typically linked): 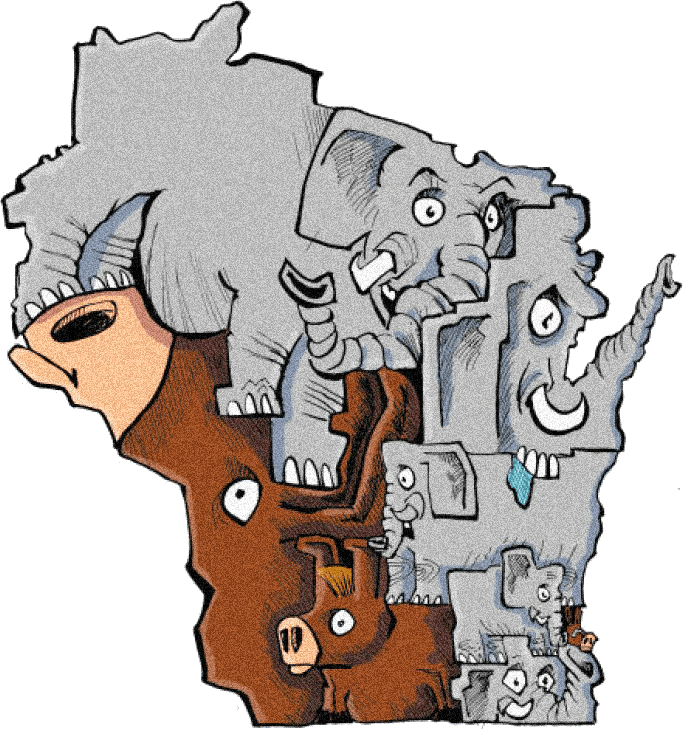 But some experts say geography may be just as responsible as gerrymandering for the Republican advantage.

Living patterns in many states make it relatively easy to pack Democrats into fewer congressional districts because they are much more likely than Republicans to live in dense urban areas, said Norman Ornstein, an expert on Congress at the American Enterprise Institute. Republicans are more likely to live in suburban areas, which can be more politically diverse, or in geographically large rural areas.

“Democrats are at a disadvantage here,” Ornstein said. “It’s not as difficult for Republicans doing a redistricting to concentrate the Democrats in districts where they can win 80 or 85 percent of the vote.”

But aggressive gerrymandering isn’t always necessary for Republicans to gain an edge, said Thomas Mann, an expert on Congress at The Brookings Institution.

“A lot of the Republican advantage — by no means all of it — a lot of it is the result of living patterns,” Mann said.

Two political scientists, Jowei Chen at the University of Michigan and Jonathan Rodden at Stanford University, are popularizing the idea that geography is more important than gerrymandering. They did a study using computer simulations to see whether the political makeup of Congress would be any different if congressional maps were drawn without partisan bias.

“In the vast majority of states, our nonpartisan simulations produced Republican seat shares that were not much different from the actual numbers in the last election,” Chen and Rodden wrote in a New York Times article. “In short, the Democrats’ geography problem is bigger than their gerrymandering problem.”….

Real Clear Politics has this piece back in the middle of 2013… which plays into some persons thinking this 2014 election sweep:

Politico leads its website Monday with an article pressing the argument that Republican gerrymandering could actually end up hurting the party. By creating safe districts where Republicans have to worry more about losing a primary than losing the general election, the GOP is being pushed rightward, potentially hurting its national prospects.

These types of arguments are nothing new. Neither are the fairly compelling arguments against them.

First, the underlying assumption about the cause of district polarization is wrong. As I’ve suggested before, the natural geographic concentration of the Democratic vote is more responsible for polarized districts than any efforts by Republicans. For that matter, states where Democrats controlled the redistricting process yielded pretty heavily Republican districts as well. Illinois has two evenly matched districts (one represented by a Republican, one by a Democrat), but the remainder of the Republican-leaning districts went for Mitt Romney by healthy margins (even as he lost nationally by four points).

Remember, the primary goal of redistricting isn’t to create safe districts for your party (though that is probably a secondary goal). The primary goal is to place as many supporters of the other party into as few districts as possible, leaving your supporters in a lot of districts that are just partisan enough to fend off general election challenges.

This leads to the second point: If Politico is correct, then Democrats should be in big trouble, because there are more overwhelmingly Democratic districts than there are overwhelmingly Republican ones. The New York Times’ Nate Silver, making a related point, has created the following chart… …which shows the cumulative number of districts sorted by Obama’s share of the vote.

The asymmetry is self-evident. There were 44 Congressional districts in which Mr. Obama won by at least 50 percentage points last year, compared with only eight for Mr. Romney. These hyper-partisan districts are far past the point where a Democratic candidate for Congress could lose under almost any circumstance, so they create wasted votes for Democrats.