From a Debate on Deism (Imported Over from RPT-Blogspot). This debate had to have taken place in early 2000’s. But, as it defines and argues a position often misunderstood, it makes it to PG’s Best. Enjoy: 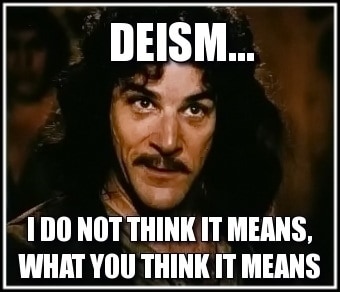 Ahhh, Countess, what an honor it is that we meet again. Your name evokes wild pictures of moonlit nights from the pages of the Scarlet Pimpernel. I will indulge a further response from you, as your last post seemed contradictory. My question was simple, it was:

You responded in kind that:

I need to clarify; I didn’t ask “if miracles were actual” (i.e., miracles have actually occurred). I simply asked if they are possible. Let me give some more ways of looking at it, since you brought up the fact of actuality, then I will return to your statement that I chose to display above.

I believe – reading your opening statement above – that you would fall under category B. I say this because you even admitted that God could, theoretically, “violate” these laws. This seems an anathema to deists, who view these laws of nature as not descriptive, but prescriptive. Let me quote C. S. Lewis on this matter for the sake of clarity in defining what these laws of nature do, and don’t do:

But if God comes to work miracles, He comes “like a thief in the night.” Miracle is, from the point of view of the scientist, a form of doctoring, tampering, (if you like) cheating. It introduces a new factor into the situation, namely supernatural force, which the scientist had not reckoned on. He calculates what will happen, or what must have happened on a past occasion, in the belief that the situation, at that point of space and time, is or was A. but if supernatural force has been added, then the situation really is or was AB. And no one knows better than the scientist that AB cannot yield the same result as A. The necessary truth of the laws, far from making it impossible that miracles should occur, makes it certain that if the Supernatural is operating they must occur. For if the natural situation by itself, and the natural situation plus something else, yielded only the same result, it would be then that we should be faced with a lawless and unsystematic universe. The better you know that two and two make four, the better you know that two and three don’t.

This is what I have come across in deism, is a belief that if God would “violate” (I am highlighting that word for a reason) His laws of nature that He set up, we would live in a “lawless and unsystematic universe” (to quote Lewis). However, let us continue with his remarks:

This perhaps helps to make a little clearer what the laws of Nature really are. We are in the habit of talking as if they caused events to happen; but they have never caused any event at all. The laws of motion do not set billiard balls moving: they analyze the motion after something else (say, a man with a cue, or a lurch of the liner, or, perhaps, supernatural power) has provided it. They produce no events: they state the pattern to which every event – if only it can be induced to happen – must conform, just as the rules of arithmetic state the pattern to which all transactions with money must conform – if only you can get hold of any money. Thus in one sense the laws of Nature cover the whole field of space and time; in another, what they leave out is precisely the whole real universe – the incessant torrent of actual events which makes up true history. That must come from somewhere else. To think the laws can produce it is like thinking that you can create real money by simply doing sums. For every law, in the last resort, says “if you have A, then you will get B.” But first catch you’re a: the laws won’t do it for you.

It is therefore inaccurate to define a miracle as something that breaks the laws of Nature. It doesn’t. If I knock out my pipe I alter the position of a great many atoms: in the long run, and to an infinitesimal degree, of all the atoms there are. Nature digests or assimilates this event with perfect ease and harmonizes it in a twinkling with all other events. It is more bit of raw material for the laws to apply to, and they apply. I have simply thrown one event into the general cataract of events and it finds itself at home there and conforms to all events. If God annihilates or creates of deflects a unit of matter He has created a new situation at that point. Immediately all Nature domiciles this new situation, makes it at home in her realm, adapts all other events to it. It finds itself conforming to all the laws. If God creates a miraculous spermatozoon in the body of a virgin, it does not proceed to break [violate] any laws. The laws at once take it over. Nature is ready. Pregnancy follows, according to all normal laws, and nine months later a child is born…. Miraculous wine will intoxicate…. The divine art of miracle is not an art of suspending the pattern to which events conform but of feeding new events into that pattern. It does not violate the law’s provisio, “If A, then B”: it says, “But this time instead of A, A2,” and Nature, speaking through all her laws, replies, “Then B2” and naturalizes the immigrant, as she well knows how. She is an accomplished hostess.

A miracle is emphatically not an event without cause or without results. Its cause is the activity of God: its result follows according to Natural law. In a forward direction (i.e., during the time which follows its occurrence) it is interlocked with all Nature just like any other event. Its peculiarity is that it is not in that way interlocked backwards, interlocked with the previous history of Nature. And this is just what some people find intolerable. The reason they find it intolerable is that they start by taking Nature to be the whole of reality.

This is the case with deism. They presuppose that God created “Nature to be the whole of reality.” a miracle doesn’t “violate” any law, simply, that law will predict what should happen once a miracle event happened.

I got a wee bit ahead of myself here, but I wanted to make sure that you understood that a proper understanding of the laws of Nature in no way restrict miracles, and that any further use of violate by me (and you) should encapsulate this definition. And all I was asking at this point was if miracles were possible. As one writer wrote of Deism:

“A being who could [as deists believe] bring the universe into existence from nothing could certainly perform lesser miracles if He chose to do so. A God who created water could part it or make it possible for a person to walk on it. The immediate multiplication of loaves of bread and fish would be no problem to a God who created matter and life in the first place. A virgin birth or even a physical resurrection from the dead would be minor miracles in comparison to the miracle of creating the universe from nothing [as deists believe]. It seems self-defeating to admit a great miracle like creation and then to deny the possibility of lesser miracles.”

I will conclude with a mock conversation from the book Answers for Atheists, Agnostics, and Other Thoughtful Skeptics: Dialogues About Christian Faith and Life. This conclusion is only meant to elucidate in laymen’s terms (laymanize) what C. S. Lewis has already said. Enjoy:

The very next day Dave was at Jim’s door again. Now he was more eager than ever to talk.

See Countess, you — by default — believe something to be outside the universe, and that this God actually did the greatest miracle of all time… that is, “creating the universe with laws and motion with mankind as its goal.” If that isn’t a miracle, then what is?