In a Washington Times story about Climate Change (formerly known as Global Warming) they point to the heavy handed tactic (scientism) used by this large machine to push an agenda without science.

….In the current issue of the peer-reviewed journal Environmental Law and Management, Australian researchers evaluated the community of so-called climate scientists and found them to be “antagonistic toward the disclosure of information.” Professor John Abbot of Central Queensland University, a chemist and lawyer, and biologist Jennifer Marohasy studied the response of the Climatic Research Unit at the University of East Anglia (CRU) and the Met Office – Britain‘s national weather service – to various information requests. The most noteworthy of these was United Kingdom resident David Holland‘s demand for the raw data underlying the infamous “hockey stick” graph that was published in the United Nations Intergovernmental Panel on Climate Change (IPCC) assessment reports. This chart was the centerpiece of the claim that the 20th century was the hottest in a thousand years. The stir that Mr. Holland‘s request triggered among the scientists who worked on the report was captured in the Climategate e-mails.

“If they ever hear there is a Freedom of Information Act now in the UK, I think I’ll delete the file rather than send to anyone,” CRU scientist Phil Jones wrote in a February 2005 e-mail. “We think we’ve found a way around this.” So much for transparency.

Under the British Freedom of Information law, like the similar U.S. statute, information created at the public expense must – with limited exceptions – be made available to the public that paid for it. At first, the Met Office answered Mr. Holland‘s request for data regarding a relatively uncontroversial chapter in the IPCC report. When he asked them for similar details regarding the hockey stick, the Met Office got around the law by claiming the data were “personal information” generated in the free time of the scientists involved. When this dodge failed to hold up, the Met Office began claiming that the records had been deleted.

“Of concern is evidence of a predisposition towards uncooperativeness on the part of the Met Office, which also used spurious claims of deleted correspondence and personal information in attempts to block the release of information,” Mr. Abbot and Ms. Marohasy wrote. The attitude isn’t limited to Britain. The Washington Times asked the White House Council on Environmental Quality for its oldest pending FOIA requests. Among the top five was an August 26 letter from the U.S. Chamber of Commerce seeking documents related to its work on climate-change legislation and the Environmental Protection Agency’s so-called greenhouse gas ruling.

None of these simple requests should have been denied or delayed. Many of those involved in purported climate science seem more preoccupied with advancing a leftist, anti-business legislative agenda than respecting the integrity of the scientific method. It’s obvious why. Their cataclysmic scare stories are unable to withstand scrutiny. By deleting e-mails and using tricks to hide the inconvenient decline in global temperatures, the climate alarmists prove to be not men of science, but ordinary frauds.

Often times, this is the same attitude of elitism that Intelligent Design theorists deal with. We just see it in action imploding on itself… something that always happens when you elitise a way of thinking. 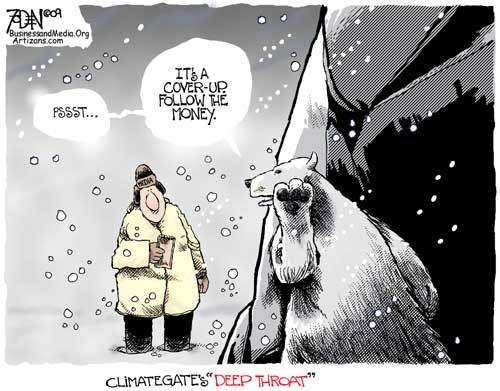