UPDATE: No drilling going on at site.

HotAir breaking news, another Oil Rig explodes. HA points out that this rig is in shallow waters, so we will see a comparison of times in capping it if it is leaking:

Three big differences from the Deepwater explosion, right off the bat: (a) This one isn’t owned by BP (and apparently never was, contrary to what one of our commenters claimed in another thread); (b) the 13 crew members are overboard but are all alive; and (c) it’s located in shallow water, so even if the worst occurs and another leak is detected, presumably plugging it would be easier and quicker.

Mariner Energy focuses on oil and gas exploration and production company focused on the Gulf of Mexico. In April, Apache Corp., another independent petroleum company, announced plans to buy Mariner in a cash-and-stock deal valued at $3.9 billion, including the assumption of about $1.2 billion of Mariner’s debt. That deal
is pending.

Responding to an oil spill in shallow water is much easier than in deepwater, where crews depend on remote-operated vehicles access equipment on the sea floor. 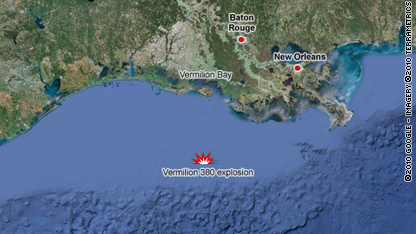