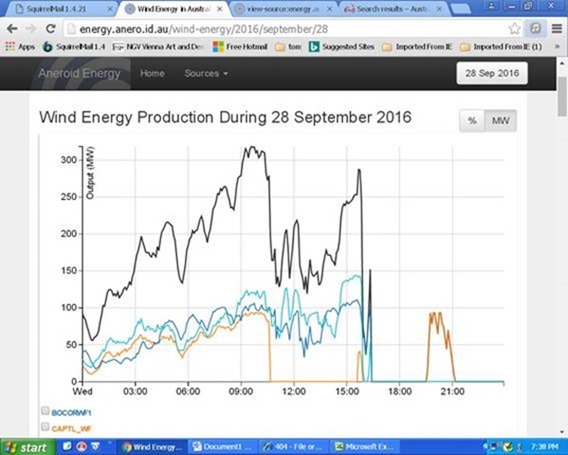 The above is the drop in power produced by South Australia’s Snowtown wind farms.

Similar to the above issues in Germany, Australia is experiencing reality as well.

Back to the dark ages: south Australia pays the price for heavy reliance on renewable energy:

“We are experiencing a state-wide outage which means we have no supply from the upstream transmission network,” electricity distributor SA Power Networks told clients late Wednesday.

In an unprecedented development, the state was cut-off from the national electricity network, the Australian Energy Market Operator (AEMO) said “resulting in a state-wide power outage in South Australia”. As a result, the entire electricity market in the state had been suspended as it sought to work with electricity transmission company ElectraNet “to identify and understand the severity of the fault, as well as determine a power restoration time”.

The extensive disruption follows the narrow avoidance of widespread blackouts in South Australia in July. At that time, the state government brought pressure to bear on a local power company for an idled power station to be restarted to avoid potential disruptions, following a lack of electricity generated from wind and solar sources at a time when it was unable to “import” sufficient supply from Victoria.

But Wednesday’s event will trigger renewed debate over the state’s heavy reliance on renewable energy which has forced the closure of uncompetitive power stations, putting the electricity network in South Australia under stress.

These issues are different to those South Australia is battling at the moment. But the increasing complexity of electricity networks, which are dealing with a more diverse location of power generators such as wind farms in remote locations rather than a small number of big power stations, means that at times of stress such as extreme storms which occurred in the state on Wednesday, outages can take longer to resolve .

South Australia relies more heavily on renewable power than any other region in the developed world. This has put it at the forefront of confronting, and resolving, the issues involved — as Wednesday’s storm has served to remind its residents.