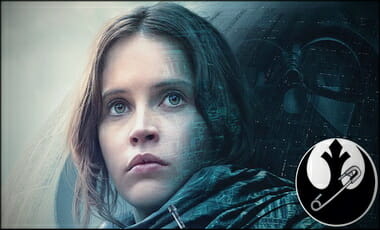 There is a LANGUAGE warning that accompanies Gavin:

White Privilege in ROGUE ONE… no thanks, I will pass. Here is some info via HOLLYWOOD REPORTER:

In the wake of this week’s U.S. election, the symbol of Star Wars‘ Rebellion had been adopted by many fans protesting the victory of Donald Trump — and now, two of the writers of next month’s Rogue One: A Star Wars Story have referenced the relationship between that movie and the current political reality on social media.

Gary Whitta, the original writer on the project, responded in kind, tweeting:

By Friday night, the tweets had been deleted, but this from Weitz remained (to the right – link to another Hollywood Reporter story in graphic):

As if to cement the connection, both Weitz and Whitta have changed their Twitter avatars to an image of the Rebel insignia with a safety pin through it, a reference to the symbol of solidarity with persecuted minorities that has gained currency in the U.S. following the election….

The DAILY CALLER continues to discuss the above graphic:

…The symbol was in fact spread and became a popular symbol for those wishing to resist Trump’s ascension to the White House, thereby giving the strong impression that the Star Wars franchise was opposed to the next president. The actor who plays Luke Skywalker, Mark Hammill, sharing it didn’t help alter that impression.

Weitz and Whitta both deleted the tweets in reference to the Empire as a white supremacist power and previous ones in which they compared Trump to Adolf Hitler and other unsavory figures. But not before their messages had spread around Twitter, providing further evidence to Trump supporters for why they would want to boycott the film. (RELATED: Obama’s Brother Boycotts Upcoming Star Wars Movie Over Trump Criticism)

Of course, many left-leaning journalists scoffed at this proposal. Esquire guffawed that Trump supporters had “no evidence” that the newest Star Wars iteration had anti-Trump overtones, even though the same publication had written up about the safety pin Rebellion badge previously.

The Daily Beast took the high road in covering the boycott by calling its adherents “no-sex-having, basement-dwelling neo-Nazis.” Numerous other outlets covered the protest in a similar fashion, all with the implication that you definitely need to see the new movie regardless of its quality.

A bit weird how all these journalists demand their audiences to see a movie because it’s being attacked by people you should hate. It reminds one an awful lot of the positive press surrounding the all-female Ghostbusters reboot, which was praised effusively simply because “misogynistic” trolls hated it. (RELATED: The Stars Of The New ‘Ghostbusters’ May Be Killing Their Own Film)

Sadly, that’s not the only similarities the latest Star Wars films share with the estrogen version of Ghostbusters. Both movies fit within the depressing Hollywood trend of pilfering popular franchises for every dime their worth with half-baked, banal rehashes of their original classics. The only difference between the original versions and the new reboots is better special effects, more diversity in the casting and a greater emphasis on “current year” values. (RELATED: 11 Serious Problems With The New Star Wars Movie)

And of course, the steep decline in quality.

So there’s enough of a reason to not want to see Rogue One to send a message to Hollywood to start making new and original projects instead of making an inferior version of “A New Hope” two years in a row….