“Big Government refers to a government that is very influential in the everyday lives of citizens, often due to its far-reaching agencies.” In other words, the growth of centralized government. Pat Buchanan once put it well:

Thomas Sowell says of this in a recent book he wrote:

Installing new powers for existing departments of government that create more legislation that straps the common man and business owner with more regulation and less freedom (an example would be the EPA and its new powers over more private property). Creating new departments and growing government in it’s scope and regulating powers (for instance, the ACA).

This is why “Dubya” always rated low in polls of people with differing political views. The left didn’t like him because he was on the opposite side of their viewpoint. The right didn’t like him because he teamed up with Kennedy and reinforced the idea of the Dept. of Education in joint legislation to increase its scope and influence WHEN it should be abolished all-together.

✦ Thomas E. Dewey stated the case against Big Government in 1950: “All-powerful, central government, like dictatorships, can continue only by growing larger and larger. It can never retrench without admitting failure. By absorbing more than half of all the taxing power of the nation, the federal government now deprives the states and local governments of the capacity to support the programs they should conduct … it offers them in exchange the counterfeit currency of federal subsidy.”

✦ Dwight Eisenhower deplored what he called “the whole-hog mentality,” which “leans toward the creation of a more extensive and stifling monopoly than this country has ever seen … you don’t need more supergovernment.”

✦ Republican House Minority Leader Gerald Ford, in 1966, blamed it all on the Democrats, labeling them “the party of Big Business, of Big Government, of Big Spending, of Big Deficits, of Big Cost of Living, of Big Labor Trouble, of Big Home Foreclosures, of Big Scandals, of Big Riots in the Streets and of Big Promises.”

✦ A favorite Ronald Reagan line was “Government is not the solution to the problem; government is the problem.” President Bill Clinton astonished some followers and delighted some critics with “The era of big government is over.”

Professor Thies notes “what conservatism is” in a short numbered way, that defines well what the base of the GOP stands for (or doesn’t stand for): 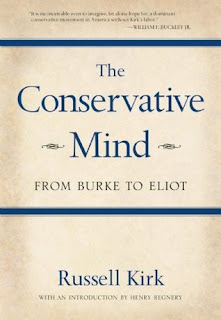 1. Belief in a transcendent order or body of natural law that rules society as well as conscience. There is objective truth in the universe, and we can know it. All sources of knowledge testify to this truth, and therefore faith and reason must be reconciled. Furthermore, our knowledge of “self-evident truths” grows as we become more aware of our nature and that of the universe.

2. Affection for the variety and mystery of human existence, as opposed to the narrow uniformity and egalitarianism of “radical” systems. We love people, not merely “the people,” and we enjoy our culture and all the cultures of the world. We love the planet on which we find ourselves and the entire universe in its vastness and in its tiniest details. It is all utterly amazing and beyond human comprehension, and we also love that. And, we are suspicious of those who would seek to impose their designs on society, as they only reveal they have no idea of the limits of their knowledge.

3. Civilization needs the rule of law and something Adam Smith described as “useful inequality.” This is in contrast to the notion of a “classless society.” Conservatives believe there are natural distinctions among men, leading to inequalities of condition. Conservatives affirm equality before God and the law; anything more leads not only to servitude but to boredom.

4. The argument for property is more than economic efficiency. It is that by having something a person can call his own, and by earning his living as opposed to depending on the apparatus of the state, a person is enabled to see himself as a unique and wonderful creature, and to love himself; and, loving himself thusly, and relating to others on the basis of mutual advantage and affection, he is enabled to love others as he loves himself. (I got this profound insight into the moral foundation of capitalism from Pope John Paul II.)

5. That social institutions such as the family, churches, fraternal organizations, for-profit business organizations, charities and even governments, are animated and justified by the choices made by those entering into them. (This is a wholesale substitution of the fifth principle of the Kirk Center, which is merely the converse of the second principle.) (I developed this from James Buchanan’s theory of clubs. It is the nexus of libertarian and conservative thought, libertarians being concerned with freedom, and conservatives with social institutions.)

6. Conservatives recognize risk and reward involved in change. While we believe in progress, we accept that mistakes are and will be made by those engaged in the process of discovery. Hayek dedicated his book The Constitution of Liberty to “The unknown civilization taking shape in America.” Hopefully, after the election we should again be excited about the great adventure we embarked upon with the founding of this country.

Three question the left rarely [if ever] ask: