For more videos and discussion, see HotAir’s post on this.

Why was Israeli raider force unprepared for violent resistance?

More questions than answers came from the IDF video shots of the violent reception for Israeli naval commandos when they raided the Turkish ship early Monday, May 31 to prevent the pro-Palestinian flotilla from reaching Gaza Port and breaking the Israeli blockade on the Hamas-ruled territory. 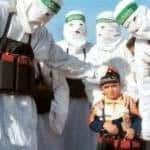 Prime minister, Binyamin Netanyahu, who cancelled his trip to the United States and is flying straight home from Canada, will have to fill in the gaps left by his official spokesmen.

Released finally 12 hours after the event, the IDF shots failed to explain the big mystery of how soldiers armed with paint balls and pistols managed to kill 9 pro-Palestinian activists (Ankara claims 15 Turkish dead) and injure at least 34 aboard the Turkish Marmora.

Together with six injured soldiers – two in critical condition – the wounded activists are being treated in Israeli hospitals.

Israel’s chief of staff Lt. Gen. Gaby Ashkenazi, and Navy commander, Maj. Gen. Eliezer Marom, reported that a fierce clash developed aboard the ship as the soldiers dropped on deck from helicopters and were mobbed by passengers. The activists fired pistols, but it is not clear if the guns were in the peace activists’ luggage or snatched from the soldiers.

Neither is it clear how civilian protesters were able to disarm elite fighters of the Navy’s Shayetet 6 unit….