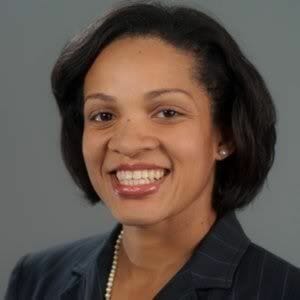 This is the political cult I always forget about, Lyndon LaRouche (pronounced le-ru). She won her candidacy even with the fact that “during the campaign, she was photographed carrying an oversized portrait of the President with a Hitler-style mustache penciled on his lip.” Remember the news broadcasts on the poster with Obama and a Hitler mustache? Well, all the posters that say this on them: 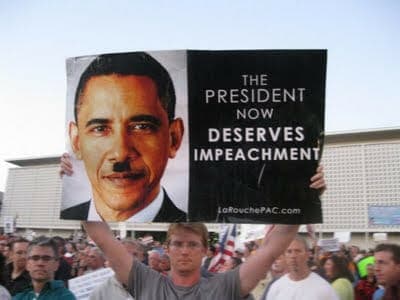 They are from the Democratic Linden LaRouche camp. There was one photo that made it into the mainstream media that was at times cropped so you wouldn’t see the race of the young man, but as you can see, the guy holding this sign up is a young black man: 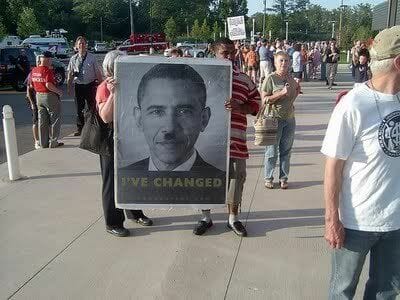 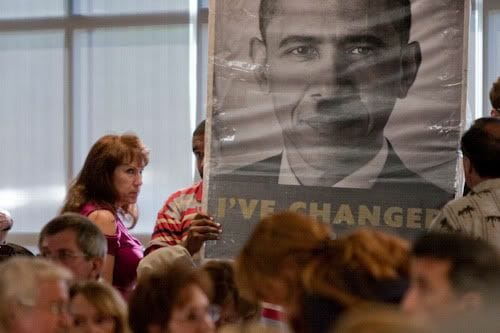 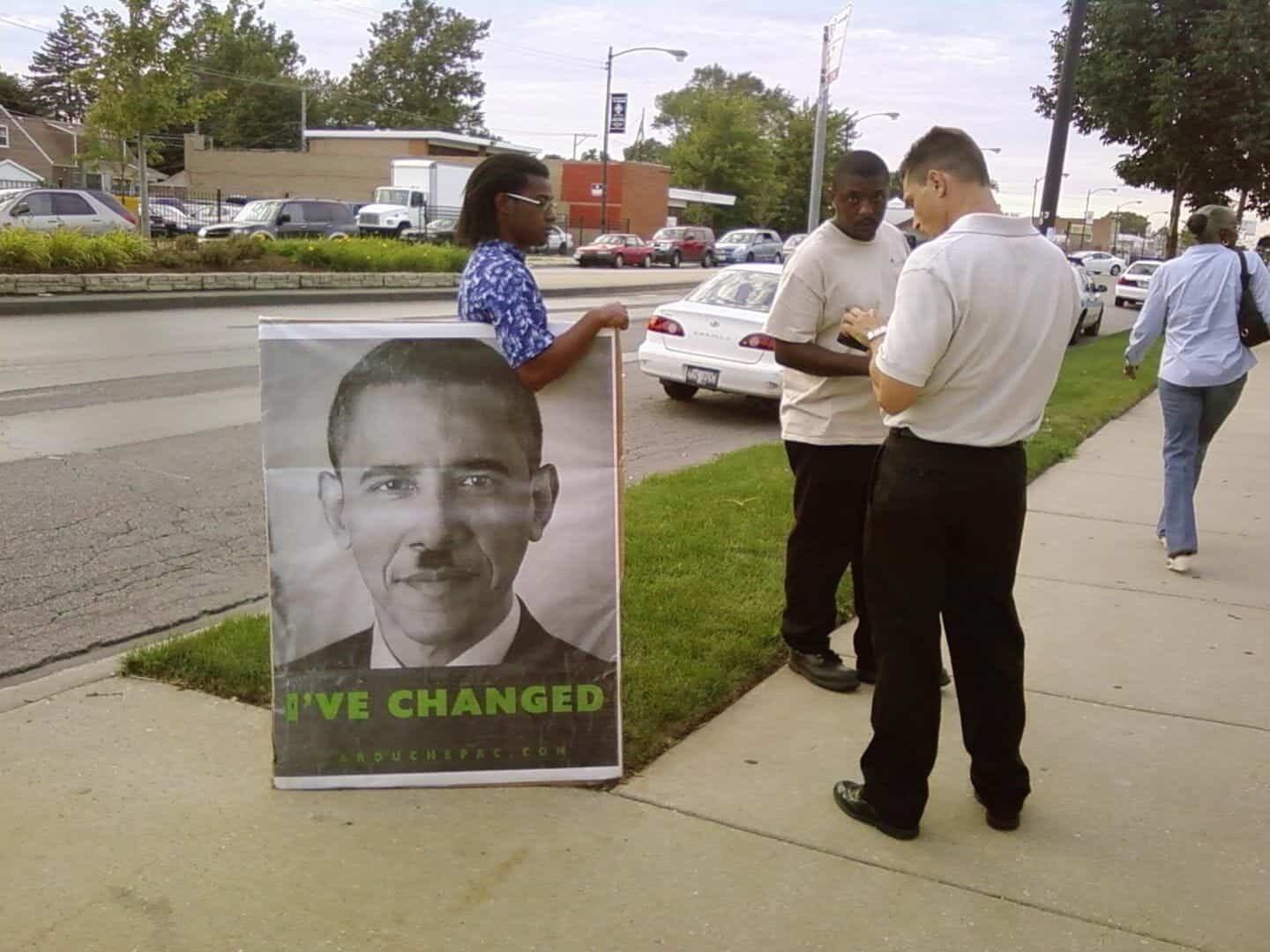 Could you imagine the outrage if this was at a Tea Party? And if it is, it is because of a LaRouchite! Do you not know who Lyndon Lerouche is, there is a good WIKI ARTICLE on him. Here is the HOTAIR DIG ON THIS STORY:

The nominee for the Texas’ CD-22 has publicly called for Barack Obama’s impeachment and wants to abolish the UN.  Democrats would have a field day making Kesha Rogers the face of the Republican Party across the entire nation … if it weren’t for the fact that Rogers is a Democrat:

South Carolina’s unexpected Democratic nominee for the US Senate, mystery man Alvin Greene, says he wants to play golf with Barack Obama. But in Texas, another surprise Democratic primary winner, congressional nominee Kesha Rogers, wants to impeach the President. So while South Carolina party officials are still unsure of what to do about Greene’s success at the ballot box, Texas Democrats have no such reservations — they wasted little time in casting Rogers into exile and offering no support or recognition of her campaign to win what once was Republican Majority Leader Tom DeLay’s old seat.

Rogers, 33, told TIME she is a “full time political activist” in the Lyndon LaRouche Youth Movement, a recruiting arm of the LaRouche political organization that is active on many college campuses. The LYM espouses LaRouche opposition to free trade and “globalism” (the UN, the World Bank, the International Monetary Fund) and it also calls for a return to a humanist classical education, emphasizing the works of Plato and Leibnitz. On her professional looking campaign website, kesharogers.com, she touts the LaRouche political philosophy — a mix of support for the economic policies of President Franklin D. Roosevelt and the impeachment of President Obama — and calls Obama a “London and Wall Street backed puppet” whose policies will destroy the Democratic Party.

Well, maybe Texas Democrats in the 22nd district just got fooled from another Greene-like stealth candidacy.  I’m sure they didn’t hear about Rogers’ nutty, LaRouchian politics before casting their ballots.  Rogers probably got listed first on the ballot, right?  Actually she was, but that’s not why she won:

Unlike South Carolina’s Greene, Rogers ran a high profile campaign, staking out a corner on a major intersection in the district to appear almost daily with a large sign: “Save NASA. Impeach Obama.” She garnered 7,467 votes, 53% of the vote, in a three way race that included a local information systems analyst Doug Blatt, who gained endorsements from local Democratic clubs and labor groups, and Freddie John Weider Jr., a preacher and onetime Libertarian candidate; Blatt came in second with 28% of the vote and Weider won 20%.

Now Democrats have refused to provide her any support, Time reports, accusing her of racism because of her connection to the LaRouche movement — which is an interesting allegation, considering that Rogers is African-American.  Maybe someone should have looked at her picture before leaping immediately to the race-baiting smear.  They would have been better off questioning her sanity…..

Here is Kesha being interviewed by “LaRouche TV.”

Take note I am a very conservative guy, but Kesha is in a political cult, and putting a LaRouchite into office, considering their across the board acceptance of just about every conspiracy theory available, is an option I will campaign against. There is also concerted cultish aspects of brainwashing as well. The reason you here this push to support NASA is that the LaRouchite’s want to (or wanted to) have a permanent colony on Mars by 2025, this is now pushed back to 2027. I don’t know why?? It has something to do with an immanent war that they feel they need to prepare for. Unlike healthy-well-balanced Christians, they feel they can usurp this almost New Age Apocalypse. Mars plays a part in this I suppose.

One thing I wish to supplant is the idea that this is some sort of “Right Wing” group. NewsBusters “busted” this liberal myth when they pointed out the following:

….For written at the poster’s bottom is the web address “LaRouchePAC.com,” the political action committee website for Communist and perpetual Presidential candidate Lyndon LaRouche.

No right-winger he. And neither he nor his acolytes are likely ones to be “stoked by the provocative megaphone of Rush Limbaugh.” In fact (from Wikipedia):

In 1979, LaRouche formed a Political Action Committee called the National Democratic Policy Committee (NDPC). LaRouche has run for the Democratic nomination for President of the United States seven times, beginning in 1980….

I think the mainstream media and bloggers who think themselves erudite enough to broadly claime political affiliation of this movement, should think twice. For instance, Crooks & Liars (a Leftist site) said this after showing Bill O’Reilly’s comments on it (sorry for the cuss word, typical though of the Left):