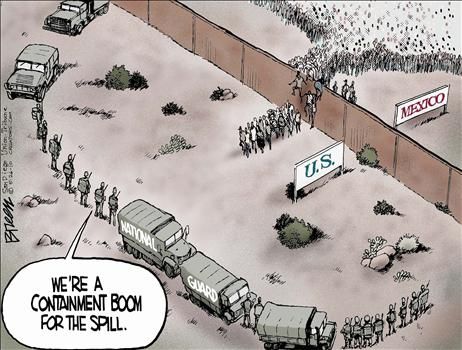 TULTITLN, Mexico — Arizona’s new law forcing local police to take a greater role in enforcing immigration law has caused a lot of criticism from Mexico, the largest single source of illegal immigrants in the United States.

And Mexico has a law that is no different from Arizona’s that empowers local police to check the immigration documents of people suspected of not being in the country legally.

“There (in the United States), they’ll deport you,” Hector Vázquez, an illegal immigrant from Honduras, said as he rested in a makeshift camp with other migrants under a highway bridge in Tultitlán. “In Mexico they’ll probably let you go, but they’ll beat you up and steal everything you’ve got first.”

Mexican authorities have harshly criticized Arizona’s SB1070, a law that requires local police to check the status of persons suspected of being illegal immigrants. The law provides that a check be done in connection with another law enforcement event, such as a traffic stop, and also permits Arizona citizens to file lawsuits against local authorities for not fully enforcing immigration laws.

“The Mexican government should probably clean up its own house before looking at someone else’s,” said Melissa Vertíz, spokeswoman for the Fray Matías de Córdova Human Rights Center in Tapachula, Mexico.

In one six-month period from September 2008 through February 2009, at least 9,758 migrants were kidnapped and held for ransom in Mexico – 91 of them with the direct participation of Mexican police, a report by the National Human Rights Commission said. Other migrants are routinely stopped and shaken down for bribes, it said.

A separate survey conducted during one month in 2008 at 10 migrant shelters showed Mexican authorities were behind migrant attacks in 35 of 240 cases, or 15%.

Most migrants in Mexico are Central Americans who are simply passing through on their way to the United States, human rights groups say. Others are Guatemalans who live and work along Mexico’s southern border, mainly as farm workers, as maids, or in bars and restaurants.

The Central American migrants headed to the United States travel mainly on freight trains, stopping to rest and beg for food at rail crossings like the one in Tultitlán, an industrial suburb of Mexico City.

On a recent afternoon, Victor Manuel Beltrán Rodríguez of Managua, Nicaragua, trudged between the cars at a stop light, his hand outstretched.

“Can you give me a peso? I’m from Nicaragua,” he said. Every 10 cars or so, a motorist would roll down the window and hand him a few coins. In a half-hour he had collected 10 pesos, about 80 U.S. cents, enough for a taco.

Beltrán Rodríguez had arrived in Mexico with 950 pesos, about $76, enough to last him to the U.S. border. But near Tierra Blanca, Veracruz, he says municipal police had detained him, driven him to a deserted road and taken his money. He had been surviving since then by begging.

Abuses by Mexican authorities have persisted even as Mexico has relaxed its rules against illegal immigrants in recent years, according to the National Human Rights Commission.

In 2008, Mexico softened the punishment for illegal immigrants, from a maximum 10 years in prison to a maximum fine of $461. Most detainees are taken to detention centers and put on buses for home.

Mexican law calls for six to 12 years of prison and up to $46,000 in fines for anyone who shelters or transports illegal immigrants. The Supreme Court ruled in 2008 that the law applies only to people who do it for money.

For years, the Mexican government has allowed charity groups to openly operate migrant shelters, where travelers can rest for a few days on their journey north. The government also has a special unit of immigration agents, known as Grupo Beta, who patrol the countryside in orange pickups, helping immigrants who are in trouble.

At the same time, Article 67 of Mexico’s immigration law requires that all authorities “whether federal, local or municipal” demand to see visas if approached by a foreigner and to hand over migrants to immigration authorities.

“In effect, this means that migrants who suffer crimes, including kidnapping, prefer not to report them to avoid … being detained by immigration authorities and returned to their country,” the National Human Rights Commission said in a report last year.

As a result, the clause has strengthened gangs who abuse migrants, rights activists say.

“That Article 67 is an obstacle that urgently has to be removed,” said Alberto Herrera, executive director of Amnesty International Mexico. “It has worsened this vicious cycle of abuse and impunity, and the same thing could happen (in Arizona).”