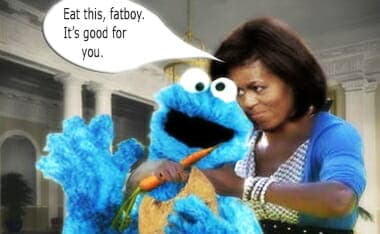 EAG NEWS has this story:

MUSKEGO, Wis. – There’s growing heartburn over federal school lunch regulations and now school board members are lashing out at First Lady Michelle Obama, the champion of the program overhaul.

“We believe that proper food nutrition and meal portion guidelines are best decided at a local level,” said Rick Petfalski, School Board president for the Muskego-Norway School District.

Opting out of the program means Muskego-Norway will no longer receive federal money for its meals, but it also means the district is free to serve whatever it wants.

Already losing money because fewer kids were buying the meals, the district will now have to cover the cost of free and reduced lunches on its own. It will do this partly by spending less on foods that students don’t eat and — they believe — increasing the number of kids buying lunches by providing tastier meals.

Under the school lunch program regulations, Petfalski said, the district’s food service was projected to be headed toward a $54,000 deficit. By opting out — and presumably selling more food — he expects about a $7,100 surplus.

“By leaving the program we will not be required to follow these onerous guidelines, pushed by and large by Michelle Obama, who last I checked has been elected by no one,” Petfalski said. (emphasis added)

He added, “The food ended up in the garbage instead of the kids’ mouths.”

At least one district – the Edmonds School District in Washington – has banned cupcakes for birthday celebrations. The Blaze has this jaw-dropping story:

A North Carolina mom is irate after her four-year-old daughter returned home late last month with an uneaten lunch the mother had packed for the girl earlier that day. But she wasn’t mad because the daughter decided to go on a hunger strike. Instead, the reason the daughter didn’t eat her lunch is because someone at the school determined the lunch wasn’t healthy enough and sent it back home.

Yes, you read that right.

The incident happened in Raeford, N.C. at West Hoke Elementary School. What was wrong with the lunch? That’s still a head-scratcher because it didn’t contain anything egregious: a turkey and cheese sandwich, banana, potato chips, and apple juice. But for the inspector on hand that day, it didn’t meet the healthy requirements.

See, in North Carolina, all pre-Kindergarten programs are required to evaluate the lunches being provided and determine if they meet USDA nutrition guidelines. If not, they must provide an alternative.

But that’s not the worst of it. Instead of being given a salad or something really healthy, the girl was given chicken nuggets instead. On top of it, her mother was then sent a bill for the cafeteria food.

Rush Limbaugh talked with a caller on his radio show about this issue… here is the transcript from that conversation:

RUSH: By the way, at West Hoke Elementary School in Raeford, North Carolina, every student had their lunch box inspected. And I think every student failed in having a nutritious lunch by the agent in charge, which is probably an SEIU union cafeteria worker.

CALLER:  Greetings from the People’s Republic of North Carolina.

CALLER:  About eight months ago my wife and I decided to enroll our son in daycare here in North Carolina, and I got this huge packet of sheets that I had to fill out, and they, you know, field trip permission slip, take your photo permission slip, and one of them was, “By signing this you agree that you’ll meet the state’s requirements for a preschool lunch,” even though I’m packing it.  And it says I have to have six ounces of milk or a milk substitute, four ounces of meat or a meat substitute, three ounces of grain, three ounces of vegetable, three ounces of fruit, and goes on and on and on.  And I did not sign it and I fought about it with them and they pointed me to the state official that I could talk to, and they told me that, “If your son doesn’t like milk just pack it anyway and we’ll dump it out for you and then you can pack something else.”  And I said, “Do you know how much a gallon of milk costs?”  And they said, “Well, that’s the rules and you have to follow ’em if you want to be in daycare.” So now I’ve got the government telling me that I’m not smart enough to feed my own child.

RUSH:  Same state.  And, I’ll tell you what, this is all coming from Michelle Obama.  There are agents in preschools, kindergartens in North Carolina examining the preschool students’ lunch boxes.  State agents!

Likewise, the UK paper, Mail Online, did a story on this kerfuffle:

A preschool girl was told her homemade meal wasn’t healthy enough so a school cafeteria monitor made her eat chicken nuggets instead.

What could be less healthy than chicken nuggets? A turkey and cheese sandwich on whole wheat bread with a side of a banana, potato chips, and apple juice.

‘What got me so mad is, number one, don’t tell my kid I’m not packing her lunch box properly,’ the mother from North Carolina, who wished to remain anonymous, told a local newspaper.

‘I pack her lunchbox according to what she eats. It always consists of a fruit. It never consists of a vegetable. She eats vegetables at home because I have to watch her because she doesn’t really care for vegetables.’

The Department of Health and Human Services requires students to eat lunches that consist of meat, milk, grain, and two servings of fruit or vegetables.

It isn’t clear what the entire meal that the cafeteria at West Hoke Elementary School consisted of, but all that the picky four-year-old girl ate were the chicken nuggets.

That said, Jani Kozlowski, the spokesperson from the DHHS children’s division said that the meal sounds like it would have passed the federal guidelines test.

‘With a turkey sandwich, that covers your protein, your grain, and if it had cheese on it, that’s the dairy,’ Ms Kozlowski told The Carolina Journal.

‘It sounds like the lunch itself would’ve met all of the standards,’ she said, not having worked with the school in question herself.

On top of the wasted food that was sent home with the little girl at the end of the day was a $1.25 bill for the ‘healthy’ school lunch.

‘I don’t feel that I should pay for a cafeteria lunch when I provide lunch for her from home,’ the mother wrote in a letter to her state representative.