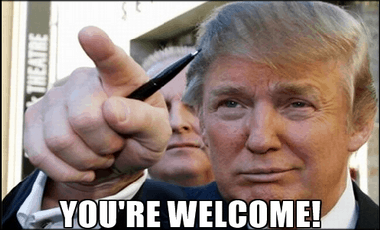 Prager is referencing this article by Roger Kimball, “Could Donald Trump Do Anything to Win the NeverTrumpers?” I will include more on this when Prager interviews him. I also have a list just from the past weekend: “Winning: Obama-Care | UNESCO | Regulations | Courts | Christmas.”

….And yet on the ground, in the real world, Trump is methodically pushing ahead with the agenda he campaigned on. That includes:

And many other initiatives large and small.

In all of these areas, Trump is proceeding not as a wrecking ball but as a deliberate, if often voluble and sometimes exasperating, agent of change.

On the campaign trail, Trump promised that, if elected, the American people would start “winning” again. “You’ll have so much winning,” he said, “you’ll get bored with winning.”

Now, almost nine months into his first term, how is he doing? Real unemployment is on the wane. The stock market is at an historic high. So is consumer confidence. Illegal immigration is down nearly 70 percent. America is now a net exporter of energy. Just a few days ago, Trump declined to re-certify the malevolent nuclear deal that Obama made with Iran, winning from Israeli Prime Minister Netanyahu this commendation: “I congratulate President Trump for his courageous decision today. He boldly confronted Iran’s terrorist regime. . . . If the Iran deal is left unchanged, one thing is absolutely certain—in a few years’ time, the world’s foremost terrorist regime will have an arsenal of nuclear weapons and that’s a tremendous danger for our collective future.”

Just a couple of days ago, Trump, having been disappointed by a supine Republican Congress, issued an executive order that will make it easier for people to band together to obtain health insurance tailored to their needs (instead of being forced into federally defined, one-size-fits-all plans) while also ending the unconstitutional federal subsidies (unconstitutional because the money wasn’t appropriated by Congress) to big insurance companies, amounting to some $7 billion per year (the price of getting those companies on board with Obamacare in the first place).

In any normal world, these would be called significant accomplishments. But in the NeverTrump bubble, none of these victories can evade the protective refracting mirrors that intercept and distort the message. For months, the Huffington Post ran the following disclaimer after every article about Trump: “Editor’s note: Donald Trump regularly incites political violence and is a serial liar, rampant xenophobe, racist, misogynist and birther who has repeatedly pledged to ban all Muslims—1.6 billion members of an entire religion—from entering the U.S.” Even now, according to the Pew Research Center, only 5 percent of news stories about Trump are positive….. But now, things have come to pass where even highly credentialed members of the race grievance industry feel permission to hurl racial epithets at white people in their professional capacity as media commentators. (American Thinker)

Tucker Carlson had a RACIAL SLUR thrown at him (Gateway Pundit):

Roger Kimball has an interesting take in regards to the bias against bow-ties as well:

So, Tucker Carlson, according to Democrat strategist Jehmu Greene, is “a bow tie’n white boy.” That’s what Ms Greene said on Megyn Kelly’s show America Live.  I think it was the “white boy” part that was supposed to be particularly offensive. As one bow-tyin’ white boy to another, however, I find it more pathetic than irritating. Why is it that Democrats are cruising around accusing everyone in sight of being racist when it is they, not the objects of their ire, who engage in the racist behavior? Harry Stein, in his new book No Matter What . . .  They’ll Call this Book Racist has some intelligent things to say about that.

It’s perfectly ok with me if Ms. Greene thinks she is disparaging  me when she identifies me by  my race and shaves a few years off my age. What I find totally unacceptable is her implicit condemnation of the bow tie.  Please, let’s leave bow ties out if it.  After all, what has that innocent bit of haberdashery ever done to her?  In an earlier column, I had occasion to ponder the mystery of why the bow tie drives a certain species of  liberal around the bend. They see a perfectly knotted bit of silk and, bang! It’s like a red flag to a bull. This recent insult to they bow tie prompts me to repeat that earlier column from 2008, in which I call for the creation of a “Society for the Prevention of Cruelty to the Bow Tie.”