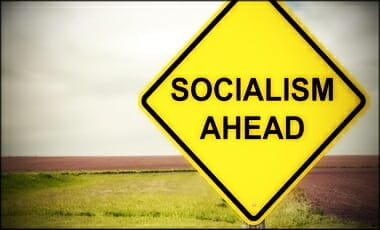 Firstly, for the sake of good conversation and clarity… we need [actually, Dr. DiLorenzo] to define socialism:

Here are some article headlines that will help encapsulate the quote:

FEC Democrat pushes for controls on Internet political speech ~ The FEC deadlocked in a crucial Internet campaign speech vote announced Friday, leaving online political blogging and videos free of many of the reporting requirements attached to broadcast ads — for now. While all three GOP-backed members voted against restrictions, they were opposed by the three Democratic-backed members…

Federal regulation of Internet coming, warn FCC, FEC commissioners ~ Democrats targeting content and control of the Internet, especially from conservative sources, are pushing hard to layer on new regulations and even censorship under the guise of promoting diversity while policing bullying, warn commissioners from the Federal Communications Commission and Federal Election Commission. “Protecting freedom on the Internet is just one vote away,” said Lee E. Goodman, a commissioner on the FEC which is divided three Democrats to three Republicans. “There is a cloud over your free speech.”…

[Editor’s note: that means blogs like mine of Gay Patriot’s could be considered “bullying” and to protect “freedom” they will be banned… the redefinition of the meaning of words is what allows these progressives to win in conversation.]

You Media People Should Stop Reporting on Terrorism So People Don’t Know What’s Going On ~ …This new push by Kerry shouldn’t be surprising, after all it was just a few weeks ago when Kerry essentially argued the use of air conditioners and other appliances are bigger threats to the world than ISIS. Here’s the reality: Kerry doesn’t want the press giving attention to the issue of terrorism because it further exposes the failure of the Obama administration’s foreign policy over the past eight years….

[Editor’s note: you see, if the press would stop reporting on terrorism, then more people may actually take Kerry — and other politicians — serious when they say stuff like, “air conditioners… are bigger threats to the world than ISIS.]

Another example from a few years ago is the Fairness Doctrine. Just listen to Ed Schultz admit something in this radio excerpt (below-right ~ from an OLD POST).

You see, all this is a power play. In a society becoming increasingly more-and-more socialist… power and control over every aspect of life becomes more-and-more natural. Almost a necessity [inherent] on the part of the politician. Democrats think they are for freedom, but in fact they are the root cause for the constant attacks on freedom. That is, progressive liberalism… not classical liberalism.

And as a Christian I am concerned, ultimately, for truth [Truth]. Truth is what a free society strives for… and often getting to it means discussing all options. “Options” are anathema to socialism, to wit:

Because of the inevitable failure of socialist bureaucrats to “plan” an economy and a society better than the millions of individuals comprising the society can, there will be “dissatisfaction with the slow and cumbersome course of democratic procedure which makes action for action’s sake the goal,” wrote Hayek. “It is then the man or the party who seems strong and resolute enough ‘to get things done’ who exercises the greatest appeal” to the public. The public demands a “strongman” (or strongwoman) “who can get things done”—even if it means the abandonment of democ­racy.

Moreover, the socialist regime is likely to be popu­lated by “the worst elements of any society,” warned Hayek. Political demagogues (and socialists are always demagogues) have long understood that it is easier for the masses to agree on a negative program—a hatred of an enemy or “the envy of the better off” than on any positive program. In Bolshevik Russia, it was the capi­talists and monarchists and Christians and independent farmers and aristocrats who were the enemy, and against whom the masses could be swayed, and against whom violence could be inflicted in the name of “the people.” In the Europe of Hayek’s day it was the plutocrat and “the Jew who became the enemy….” “In Germany and Austria the Jew had come to be regarded as the represen­tative of capitalism,” and hence became the target of extreme hatred. In America, political demagogues tar­get “Wall Street” and the wealthy “one percent” as the objects of their hatred. [RPT’s addition: And the “fundamentalist that would dare question transgender normalization of bathroom use and female sports, etc.]

Hatred and violence, especially for the young, is justified in the name of idealism, however perversely understood. To a socialist, the ends justify the means (which is the reverse of traditional morality) and can justify any action desired by a socialist. To a social­ist, said Hayek, there is nothing “which the consis­tent collectivist must not be prepared to do if it serves `the good of the whole.’”  This socialist mindset accepts if not celebrates “intolerance and brutal sup­pression of dissent,” and “the complete disregard of the life and happiness of the individual,” because the “selfish” individual does not matter; the socialist will argue that what he does is “for the good of the whole.”

In a socialist society, said Hayek, the only “power” worth having is political power, and to consolidate that political power government relies on propaganda, intimidation, and government domestic spying to dis­credit, bully, and eliminate possible opposition.

Socialism can lead to “the end of truth,” as Hayek called it, because socialists believe in indoctrinating people into “The Truth.” This is why socialist regimes have made us familiar with “reeducation camps” and rigid, totalitarian ideological conformity. Socialists believe that there are no legitimate, alternative view­points. Socialist propaganda must dominate the edu­cational system and the mass media so that, in Hayek’s words, “a pseudoscientific theory becomes part of the official creed” which “directs everybody’s actions.” Under socialism, “every act of the government, must become sacrosanct,” while minority opinions—or even majority opinions at odds with the official ideology—must be silenced and are demonized. This all sounds like a perfect definition of the “political correctness” that plagues American colleges and universities and which has gone a long way toward destroying aca­demic freedom both for students and professors.

“Truth” in a socialist society is not something to be debated; it is mandated and enforced by the Social­ist regime, from which there is no alternative and no appeal. Once socialist ideology takes over and respect for actual truth is destroyed, wrote Hayek, then all morals are assaulted because all morality is based on respect for the truth.

Worth your while as well is this commentary by Ezra Levant on Venezuela a little over a year ago. 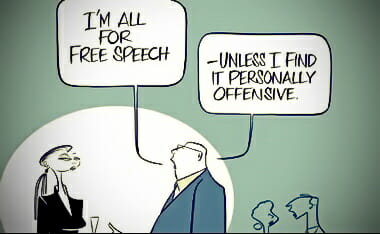