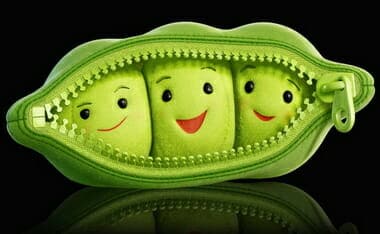 “When a man ceases to believe in God he does not believe in nothing, he believes almost in anything.” ~ G. K. Chesterton

This is an old story, but I wanted to get it onto my site for reference. It comes from Daily Caller’s Wesley J. Smith, nd is the forefront of vegan/vegetarian “ethics.”

Just when you thought things could not get any weirder: Last Sunday, The New York Times — of course! — ran a piece in its Sunday opinion section by a university professor — of course! — claiming that it is unethical to eat certain plants. [The piece is entitled, “If Peas Can Talk, Should We Eat Them?“]

According to Michael Marder, recent discoveries show that peas communicate with each other through their root systems and soil. Of course, being plants, pea “communication” doesn’t involve the least level of sentience, not to mention rationality. It is a purely chemical response to environmental stimuli.

But should pea chemical communication elevate the moral value of peas? Yes, according to Marder (my emphasis):

When it comes to a plant, it turns out to be not only a what but also a who — an agent in its milieu, with its own intrinsic value or version of the good. Inquiring into justifications for consuming vegetal beings thus reconceived, we reach one of the final frontiers of dietary ethics.

Good grief. Plants aren’t “beings” and “who” equates to personhood. But plants don’t have any “version of the good — or for that matter, the bad: They are plants!

Marder then claims that plant sophistication means we should not eat them unless they live for several growing seasons:

The “renewable” aspects of perennial plants may be accepted by humans as a gift of vegetal being and integrated into their diets. But it would be harder to justify the cultivation of peas and other annual plants, the entire being of which humans devote to externally imposed ends.

I hate to repeat myself, but good grief! People are starving in the world and Marder worries about the ethics of eating peas and carrots! Worse, the piece runs with all due respect in the Sunday opinion section of the nation’s Paper of Record! (Yes, I’m yelling.)

…read it all and try not to yell!

In another article Wesley J. Smith in National Review mentions this new frontier of ethics in speaking about the 20123 elections, and Romney’s father’s “MURDEROUS” heart!

I just saw a funny Tweet from @jimnorton, in which he “condemns” Mitt Romney’s father for “murdering roses” when he placed one on his wife’s bedstand every night. (Romney scored emotionally in last night’s speech when he recalled that his mother found out his father had died because the rose was missing.) Thing is, Norton’s jibe is not quite as off the wall as some might think. Switzerland has, for instance, placed the “dignity” of individual plants in its constitution. The government then asked a big brained bioethics commission to explain why individual plants have dignity (they share molecular material with us), and the commission gave an example of a terrible immoral action. From my Weekly Standard column, “The Scream of the Asparagus:”

The committee offered this illustration: A farmer mows his field (apparently an acceptable action, perhaps because the hay is intended to feed the farmer’s herd–the report doesn’t say). But then, while walking home, he casually “decapitates” some wildflowers with his scythe. The panel decries this act as immoral, though its members can’t agree why. The report states, opaquely: At this point it remains unclear whether this action is condemned because it expresses a particular moral stance of the farmer toward other organisms or because something bad is being done to the flowers themselves.

So, according to this crowd, George Romney apparently did murder roses–worse, put out a contract for daily rosicide!

After referencing the other article about peas that he [Smith] wrote, he ends with this:

Then there is the growing “nature rights” movement. My point is that @jimnorton thought he was being funny–and he was. But some take such nonsense seriously. That’s what happens when you reject human exceptionalism. You go–pardon the animalism–nuts!