See some other posts: 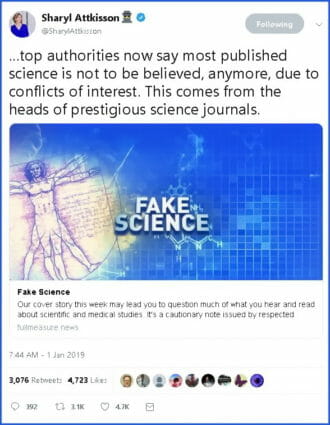 Sharyl: What’s your view of how much we can trust the articles that appear in these prestigious medical journals?

Dr. Howard Pomeranz: One always has to be aware of the possibility that somebody who is an author or coauthor or someone who is consulted to help support the research was a paid consultant by the pharmaceutical industry and that’s not always apparent.

Dr. Howard Pomeranz is a neuro-ophthalmologist at the Hofstra Northwell School of Medicine. He’s authored dozens of journal articles and says many studies are written by academic researchers fraught with conflicts of interest.

Sharyl: In some cases, it sounds like it’s nothing more than advertising by an employee that works for a drug company.

Pomeranz: It is and I think that’s often the way you have to look at it.

Angell: I came to the New England Journal of Medicine in 1979. Starting about then was when you saw the drug companies assert more and more control until finally they over the next couple of decades, they began to treat the researchers as hired hands. They would design the research themselves. You know you can do a lot of mischief in how you design a trial. Or we’ll test this drug and we’ll tell you whether it can be published or not, and so if it’s a positive study, it’s published, if it’s a negative study, it’ll never see the light of day.

That happened in 2000. The makers of an experimental AIDS vaccine threatened to sue Dr. James Kahn, their lead researcher at the University of California San Francisco for $7 million, to keep him from publishing study results showing the vaccine didn’t work.

Angell: An official of the company said something to the effect of, ‘we have put $30 million into that study, we have our rights,’ or something like that.

Angell says as she applied due diligence to the many studies submitted to the New England Journal of Medicine, it started to feel like a losing battle.

Angell: I would call up and say, okay, you’ve shown that your drug is pretty good. But there’s not a single side effect. Any drug that does anything is going to have some side effects. And I had people say, ‘well the sponsor won’t let me’. And so, I became to be extremely distrustful of most of the research that was published. We did our very best, we often rejected things because it was clearly biased, but anything we rejected always ended up in another journal.

Angell left the New England Journal of Medicine in 2000, but kept her eye on the journal industry, which she says resisted meaningful efforts to rein in conflicts of interest. In 2009, she wrote an article that famously declared “It is simply no longer possible to believe much of the clinical research that is published.”

Sharyl: What would you say is the state of the journal landscape today and the New England Journal of Medicine, particularly?

The New England Journal of Medicine declined our interview requests, but told us “since 1984 we have requested author disclosures.” In 2009, the journal says it helped pioneer a universal form requesting “that authors report all relevant financial conflicts” during the most recent three years. And it posts the form and study sponsorship. Besides Dr. Angell, another powerful voice is also weighing in. The current Editor in Chief of the British journal Lancet, Dr. Richard Horton, wrote a scathing editorial saying: “Much of the scientific literature, perhaps half, may simply be untrue; science has taken a turn towards darkness.”

Another article referencing issues with peer-review comes via THE BLAZE:

A peer-reviewed academic journal was recently duped in a hilarious way.

Two academics, Peter Boghossian and James Lindsay, recently used pen names to submit an academic paper to a peer-reviewed academic journal to expose the absurdity of modern gender studies by arguing that the male reproductive organ known as the penis is a “social construct.”

The 3,000-word paper was titled, “The Conceptual Penis As A Social Construct,” and was submitted, and published, to the “Cogent Social Sciences” academic journal in its May edition. Lindsay and Boghossian cited 20 sources in their paper, many of which they said they made up or never read….