The Euthyphro Dilemma, with Frank Turek from Christian Research Institute on Vimeo.

There are “two horns” to the dilemma presented, but much like Plato does, we will split the horns with a third option and show that the TWO CHOICES are false becuase there is a third viable option:

If a dilemma with limited choices is presented, you should always consider that these choices may not be your only options.  Euthyphro’s case is a prime example.  There is a third alternative…and who knows?, there could be others that no one has come up with yet, but Christianity teaches this third alternative for the basis of morality:

God wills something because He is good.

What does this mean?  It means that the nature of God is the standard of goodness.  God’s nature is just the way God is.  He doesn’t ‘will’ Himself to be good, and kind, and just, and holy…He just is these things.  His commandments to us are an expression of that nature, so our moral duties stem from the commands of a God who IS good…and loving…and just…not a God who arbitrarily decides that he will command something on a whim, but gives commandments that stem from His unchanging character.

If God’s character defines what is good.  His commands must reflect His moral nature.

The Euthyphro dilemma is a false one because there is at least one other choice that splits the horns of the dilemma.  This option, taught as part of the Christian doctrine of who God is, is perfectly consistent with the concept that God must exist for objective morality to exist in our world.

Plato came up with his own third option…that moral values simply exist on their own.  No need for God.  Later Christian thinkers equated this to God’s moral nature, like we just discussed.  However, some argue that God is not necessary; that goodness and justice, etc. can exist on their own…this idea is often referred to as Atheistic Moral Platonism….

This is VERY simple to grasp, but here are more dealings with it, Peter Kreeft’s short dealing with this supposed dilemma:

There are four possible relations between religion and morality, God and goodness.

Religion and morality may be thought to be independent. Kierkegaard’s sharp contrast between “the ethical” and “the religious,” especially in Fear and Trembling, may lead to such a supposition. But (a) an amoral God, indifferent to morality, would not be a wholly good God, for one of the primary meanings of “good” involves the “moral”—just, loving, wise, righteous, holy, kind. And (b) such a morality, not having any connection with God, the Absolute Being, would not have absolute reality behind it.

God may be thought of as the inventor of morality, as he is the inventor of birds. The moral law is often thought of as simply a product of God’s choice. This is the Divine Command Theory: a thing is good only because God commands it and evil because he forbids it. If that is all, however, we have a serious problem: God and his morality are arbitrary and based on mere power. If God commanded us to kill innocent people, that would become good, since good here means “whatever God commands.” The Divine Command Theory reduces morality to power. Socrates refuted the Divine Command Theory pretty conclusively in Plato’s Euthyphro. He asked Euthyphro, “Is a thing pious because the gods will it, or do the gods will it because it is pious?” He refuted the first alternative, and thought he was left with the second as the only alternative.

But the idea that God commands a thing because it is good is also unacceptable, because it makes God conform to a law higher than himself, a law that overarches God and humanity alike. The God of the Bible is no more separated from moral goodness by being under it than he is by being over it. He no more obeys a higher law that binds him, than he creates the law as an artifact that could change and could well have been different, like a planet.

The only rationally acceptable answer to the question of the relation between God and morality is the biblical one: morality is based on God’s eternal nature. That is why morality is essentially unchangeable. “I am the Lord your God; sanctify yourselves therefore, and be holy, for I am holy” (Lev. 11:44). Our obligation to be just, kind, honest, loving and righteous “goes all the way up” to ultimate reality, to the eternal nature of God, to what God is. That is why morality has absolute and unchangeable binding force on our conscience.

The only other possible sources of moral obligation are:

a. My ideals, purposes, aspirations, and desires, something created by my mind or will, like the rules of baseball. This utterly fails to account for why it is always wrong to disobey or change the rules.
b. My moral will itself. Some read Kant this way: I impose morality on myself. But how can the one bound and the one who binds be the same? If the locksmith locks himself in a room, he is not really locked in, for he can also unlock himself.
c. Another human being may be thought to be the one who imposes morality on me—my parents, for example. But this fails to account for its binding character. If your father commands you to deal drugs, your moral obligation is to disobey him. No human being can have absolute authority over another.
d. “Society” is a popular answer to the question of the origin of morality “this or that specific person” is a very unpopular answer. Yet the two are the same. “Society” only means more individuals. What right do they have to legislate morality to me? Quantity cannot yield quality; adding numbers cannot change the rules of a relative game to the rightful absolute demands of conscience.
e. The universe, evolution, natural selection and survival all fare even worse as explanations for morality. You cannot get more out of less. The principle of causality is violated here. How could the primordial slime pools gurgle up the Sermon on the Mount?

Atheists often claim that Christians make a category mistake in using God to explain nature; they say it is like the Greeks using Zeus to explain lightning. In fact, lightning should be explained on its own level, as a material, natural, scientific phenomenon. The same with morality. Why bring in God?

Because morality is more like Zeus than like lightning. Morality exists only on the level of persons, spirits, souls, minds, wills—not mere molecules. You can make correlations between moral obligations and persons (e.g., persons should love other persons), but you cannot make any correlations between morality and molecules. No one has even tried to explain the difference between good and evil in terms, for example, of the difference between heavy and light atoms.

So it is really the atheist who makes the same category mistake as the ancient pagan who explained lightning by the will of Zeus. The atheist uses a merely material thing to explain a spiritual thing. That is a far sillier version of the category mistake than the one the ancients made; for it is possible that the greater (Zeus, spirit) caused the lesser (lightning) and explains it; but it is not possible that the lesser (molecules) adequately caused and explains the greater (morality). A good will might create molecules, but how could molecules create a good will? How can electricity obligate me? Only a good will can demand a good will; only Love can demand love.

(Twenty Arguments for the Existence of God) 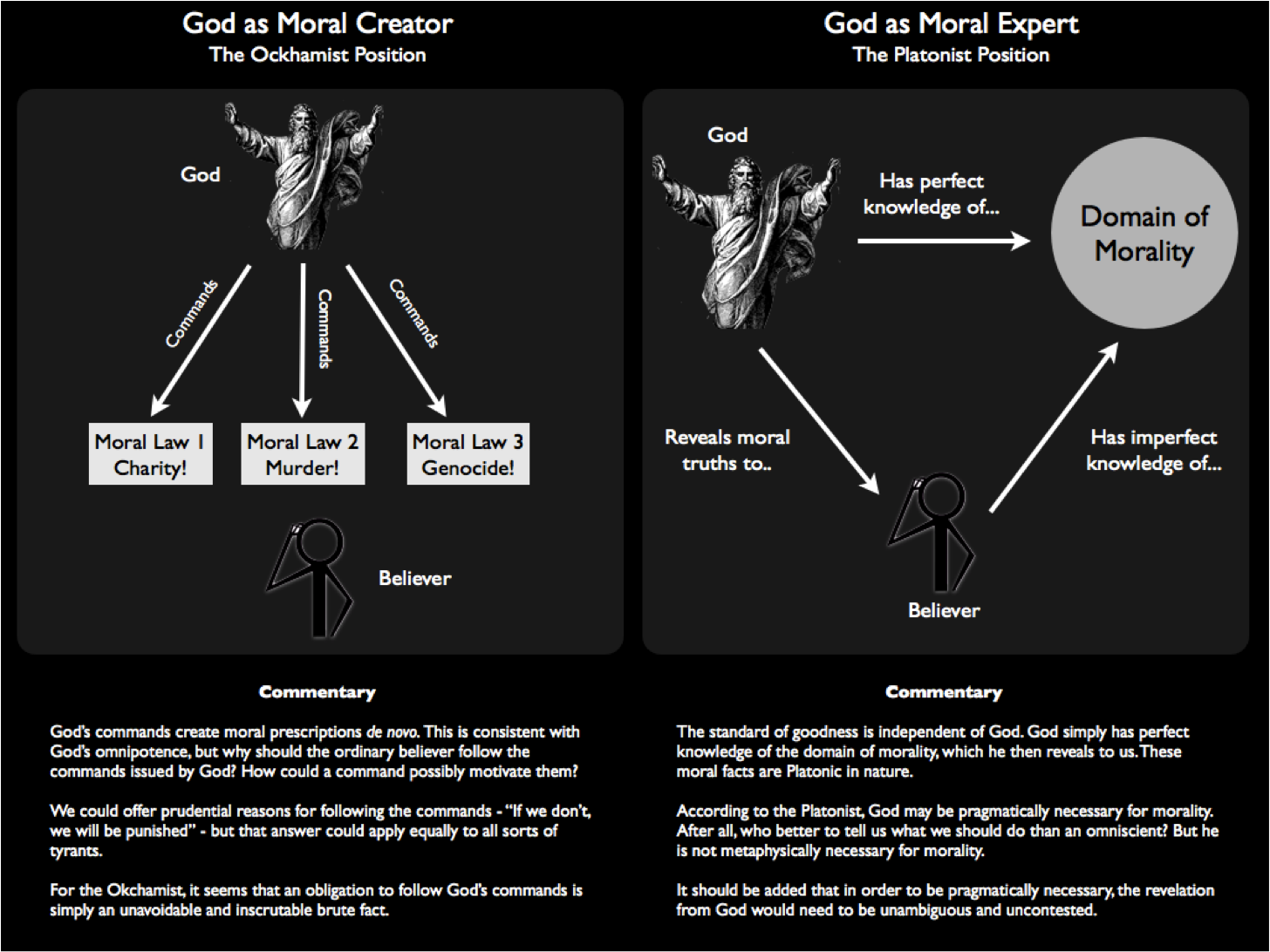 While Plato was dealing with polytheism and a form of monism, this argument as dealt with herein is response to the challenges presented to theism. However, his use of a third option is what we present here as well… making this dilemma mute. What was Plato’s solution?

“You split the horns of the dilemmas by formulating a third alternative, namely, God is the good. The good is the moral nature of God Himself. That is to say, God is necessarily holy, loving, kind, just, and so on. These attributes of God comprise the good. God’s moral character expresses itself toward us in the form of certain commandments, which became for us our moral duties.

Hence, God’s commandments are not arbitrary but necessarily flow from His own nature. They are necessary expression of the way God is.One of the most important notes to mention is that once there is a third alternative, there is no longer a dilemma. Mariano Grinbank of True Free Thinker deals with the many aspects of this supposed dilemma. He does an excellent job of doing this. However, zero in on the section from the 2:40 mark to the 3:45 mark (the same idea is brought up in the 6:55 through 9:55 mark of the Craig response). Mariano Grinbank does a bang-up job below (Grinbank’s article being read by someone else):

Here is William Lane Craig responding to some challenges in regards to the Euthyphro argument.