This first video is of a Soviet grocery store filmed in 1986:

This second video is of a grocery store from Venezuela from this year (2015):

And as Libertarian Republican notes they are running out of beer:

First, it was shortage of toilet paper. Then, a shortage of food. Now, Venezuela is facing a beer shortage.

The official excuse is that the country isn’t able to import enough ingredients, and that the evil farmers are holding out. As Lenin said of those evil farmers, they are nothing but petite bourgeoisie. Why, they are the dung of the devil!….

In a move that will no doubt help further the Venezuelan government’s aim of establishing a socialist utopian republic, President Nicolas Maduro announced this week that grocery stores will soon begin the mandatory fingerprinting of customers. The peculiar initiative, which could be implemented by the end of the year, is meant to help combat the hoarding and smuggling of government-subsidized goods.

Venezuela exerts stringent currency and price controls on many products in an attempt to keep them affordable for its poorest citizens. Unfortunately, a staggering quantity of this merchandise ends up being secreted out of the country and re-sold at a profit in neighboring Colombia.

The oil-rich nation has been experiencing a chronic shortage of food supplies for a long while. Maduro, who succeeded the late Hugo Chavez, accused the political opposition last year of engineering the country’s shortages with the help of the CIA in order to undermine his government.

Faced with empty store shelves due to the combination of price controls, currency restrictions, and smuggling, Venezuelans are having a hard time finding the basics they need to live. The crisis has spurred the development of an app called Abasteceme (“Supply Me”), which allows shoppers to document and share where they have managed to find products.

The fingerprinting proposal, which critics decried as an invasion of privacy

and an attempt to institute a Cuban-style rationing program, would be similar to an anti-fraud system Venezuela currently employs during elections,

Voter id is only valid in Progressive socialist nations to keep enemies-of-the-people from reactionary crimes. Those of you in countries that have not repented of your oppressive capitalistic crimes must never, ever use ID of any kind when it comes to voting.

You see… down deep all these “freedom of speech” guys who say they are libertarian or for freedom of thought — are really small tyrant down deep. The Left always falls into what is in their nature.

Here is a line at a grocery store via Economic Policy Journal: 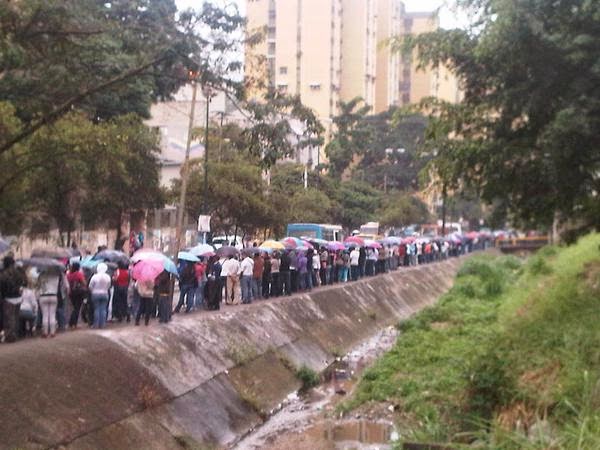 Ahh, the joys of socialism.