NewsBusters has this critique of Bill Maher… good stuff!

….Not so funny was how Maher was doing exactly what Limbaugh spoke about Wednesday:

Part of the Cause
Meteorologists have determined that large fields of corn raise the dew points in surrounding areas because corn “sweats” on hot days.

RUSH LIMBAUGH: They’re playing games with us on this heat wave again. Even Drudge is getting sucked in here, gonna be 116 in Washington. No, it’s not. It’s gonna be like a hundred. Maybe 99. The heat index, manufactured by the government, to tell you what it feels like when you add the humidity in there, 116. When’s the last time the heat index was reported as an actual temperature? It hasn’t been, but it looks like they’re trying to get away with doing that now. Drudge is just linking to other people reporting it, he’s not saying it, I don’t want you to misunderstand, but he’s linking to stories which say 116 degrees in Washington. No. It’s what, a hundred, 97, 99. It’s gonna top out at 102, 103. It does this every year. There’s a heat dome over half the country, the Midwest, it’s moving east. And it happens every summer.

Indeed. Maher likely got this 123 figure from a CNN.com piece reporting such a heat index in Hutchinson, Minnesota, Tuesday.

If folks like him were honest, they would first make clear that heat index is not temperature. It’s temperature including the impact humidity has on it.

Tuesday evening, around the dinner hour, the dew point at Moorhead reached 87.8 F, making this the most humid reporting station on the planet. The heat index peaked at an almost incomprehensible 134 F. at Moorhead.

Yet, as Minnesota Public Radio reported Wednesday, it was only 93 F when that record-breaking heat index was recorded in Moorhead.

What was responsible then? As the Bemidji Pioneer reported Saturday, it was the unprecedented humidity:

Meteorologists have determined that large fields of corn raise the dew points in surrounding areas because corn “sweats” on hot days. When the humid air mass that originated over the Gulf of Mexico passed over the sea of green that is Iowa, sweating corn likely added to the humidity levels.

I found this VERY funny!, WHY? I will tell you why… renewable fuel!

Perhaps no one drew a stronger correlation between the politics of alternative energy and the rise in inflation than Jim Cramer in a February 27 interview with Democratic presidential hopeful Sen. Hillary Clinton (D-N.Y.) on his CNBC show “Mad Money.” 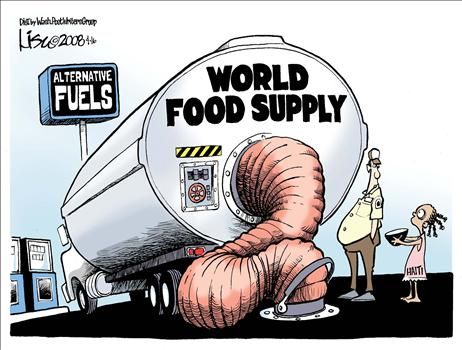 Ethanol is killing children around the world… Democrats! It takes 450lbs of Corn to fill one SUV tank… that is a years worth of food for a child.

”Today, there is a lot of investment in ethanol,” Jacobson said. ”But we found that using E85 will cause at least as much health damage as gasoline, which already causes about 10,000 U.S. premature deaths annually from ozone and particulate matter.”

And finally, an old post at NewsBusters dated 8-20-07. I would be remiss not to mention Walter Williams post on the subject, Big Corn and Ethanol Hoax

A new study published in the journal Science last Friday concluded that the continued burning of oil-related energy products combined with the planting of additional forests is better for the environment than the manufacture and use of biofuels such as ethanol.

In fact, the authors suggested that governments across the globe move away from biofuels as a global warming solution completely, and instead focus moneys and energies on reforestation and increasing the efficiencies involved with the burning of fossil fuels.

Of course you didn’t hear about this because no major American press outlet thought it was newsworthy despite media’s fascination with anthropogenic global warming.

Increasing production of biofuels to combat climate change will release between two and nine times more carbon gases over the next 30 years than fossil fuels, according to the first comprehensive analysis of emissions from biofuels.

Biofuels – petrol and diesel extracted from plants – are presented as an environmentally friendly alternative to fossil fuels because the crops absorb carbon dioxide from the atmosphere as they grow.

The study warns that forests must not be cleared to make way for biofuel crops. Clearing forests produces an immediate release of carbon gases into the atmosphere, accompanied by a loss of habitats, wildlife and livelihoods, the researchers said.

The reason is that producing biofuel is not a “green process”. It requires tractors and fertilisers and land, all of which means burning fossil fuels to make “green” fuel. In the case of bioethanol produced from corn – an alternative to oil – “it’s essentially a zero-sums game,” says Ghislaine Kieffer, programme manager for Latin America at the International Energy Agency in Paris, France (see Complete carbon footprint of biofuel – or is it?).

What is more, environmentalists have expressed concerns that the growing political backing that biofuel is enjoying will mean forests will be chopped down to make room for biofuel crops such as maize and sugarcane. “When you do this, you immediately release between 100 and 200 tonnes of carbon [per hectare],” says Renton Righelato of the World Land Trust, UK, a conservation agency that seeks to preserve rainforests.

Any questions as to why American media will ignore this study? Well, there’s more:

Righelato and Dominick Spracklen of the University of Leeds, UK, calculated how long it would take to compensate for those initial emissions by burning biofuel instead of gasoline. The answer is between 50 and 100 years. “We cannot afford that, in terms of climate change,” says Righelato.

The researchers also compared how much carbon would be stored by replanting forests with how much is saved by burning biofuel grown on the land instead of gasoline.

They found that reforestation would sequester between two and nine times as much carbon over 30 years than would be saved by burning biofuels instead of gasoline (see bar chart, right). “You get far more carbon sequestered by planting forests than you avoid emissions by producing biofuels on the same land,” says Righelato.

How’s that for an inconvenient truth? Or this:

He and Spracklen conclude that if the point of biofuels policies is to limit global warming, “policy makers may be better advised in the short term to focus on increasing the efficiency of fossil fuel use, to conserve existing forests and savannahs, and to restore natural forest and grassland habitats on cropland that is not needed for food.”

Something to bear in mind is that Righelato is not a climate change skeptic. Far from it. He’s the Trustees Chairman of the international conservation charity known as World Land Trust which “has been working to preserve the world’s most biologically important and threatened lands, and has helped purchase and protect over 350,000 acres of habitats rich in wildlife, in Asia, Central and South America and the UK.”

Furthermore, this organization’s chief patron is Sir David Attenborough who is widely considered to be one of the fathers of the television nature documentary.

As such, these are greens through and through who just don’t feel biofuels are the answer to the problem. In fact, the Guardian quotes Righelato:

“Biofuel policy is rushing ahead without understanding the implications…It is a mistake in climate change terms to use biofuels.”